Creating a photo contest or “enter to win” giveaway is a tried and true tactic that’ll help you win some new business and stir up excitement around your brand. And there are plenty of contest-building platforms you can use to build a basic giveaway or contest.

But that’s the problem: most of them only allow you to build something really basic. In other words, boring.

So maybe it’s time to call in reinforcements.

Hiring a team of experienced professionals to help you build a unique and attention-grabbing contest may be just what you need to shake things up.

Having experts on your team may even save your company money in the long run.

There’s a misconception that only the major brands can afford the luxury of hiring a company to help them build a contest. While it’s true some big brands spend tens of thousands of dollars executing complexly constructed campaigns, there are also other options. Sometimes, it even behooves the “little guys” to invest in hired help. Having experts on your team to help with brainstorming and execution will minimize hiccups. If someone else is doing all of the heavy lifting, it may even save your company money in the long run.

Now here’s the most important thing to know: Hiring a crack-shot team to build your next contest doesn’t have to cost your entire year’s marketing budget, either. The key is finding a company with flexibility in their pricing. But that’s just for starters.

Here are some not-so-obvious things to look for when shopping around.

Someone who can tell you “no”

Online contests are a different animal than say, a website or app. You need experts who know how to coax participation and engage an audience to get the results you’re looking for, based on your goals.

At ShortStack, it’s pretty common for customers to approach us with an idea. Sometimes, that idea is very specific and includes a long list of steps and requirements people will need to follow in order to participate. For example, here’s an example of something we hear all the time: “To participate, I want the user to have to share the contest, tag two friends, follow us on Twitter, Instagram, and Facebook, then fill out a form which includes no less than 250 words on why they love our product. When they submit the form, I want them to be redirected to my online store.”

Not only are some of those things not possible, all those requirements would create a terrible user experience and greatly reduce the number of entries collected (if any are collected at all).

A good campaign-builder will have the experience and where-with-all to know if your idea’s a winner, or if it may need tweaking. The contest experts should also be able to make suggestions based on what you’re looking to accomplish. 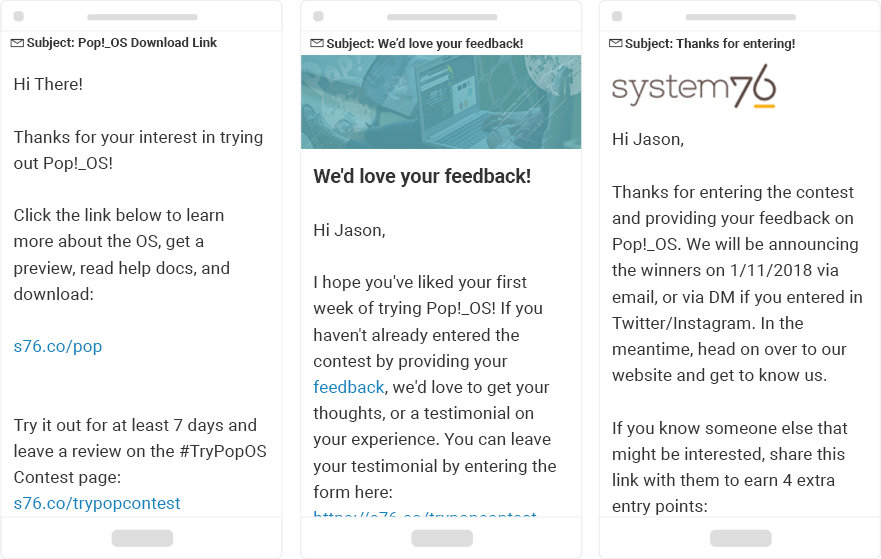 Pop!_OS ran a campaign asking users to download their software and then share a review. ShortStack suggested using autoresponder emails. This allowed Pop!_OS to have a record of who downloaded and gave Pop the ability to follow up during and after their promotion.

Someone with a past

Ask for examples and testimonials from previous clients. These will be a great indicator of what the polished, finished product will look like, and give you an idea of what the company is like to work with. Perhaps they have examples specific to what you’re looking to build, or have worked with businesses similar to yours.

Examples and testimonials from previous projects will help you sleep at night knowing you’re in good hands.

Someone who’s not the cheapest

Be wary of companies charging far less than their competitors. It’s one thing for a company to position a competitive price point, it’s another to be down-right desperate. It’s always tempting to get your contest built for cheap, but a little digging into the company may reveal negative reviews, or that they’re brand new on the contest-building scene.

Don’t turn away the higher-priced companies either, because the company quoting you the lowest price may not actually be the least expensive.

In other words, some companies, although they charge more on the front-end, will throw in additional services that may make their offerings less expensive in the long run. Therefore, you’ll need to look at the big picture, not just what Company A charges, vs. Company B.

We recently helped Ford run a contest, in which participants could submit a photo showing “school spirit” as a way to enter Ford’s contest.  If the photo included a Ford logo, the participant received additional points. There were lots of other stipulations as well – the logo had to be on a car, it had to be clear, the photo couldn’t contain any nudity, profanity, drugs or alcohol, etc.

As you can imagine, moderating tens of thousands of entries day and night took quite a bit of manpower. Absorbing this cost into the contest budget saved Ford quite a bit of money.

Other contest-building companies may have quoted Ford a smaller fee, but by taking over the huge moderation component, hiring ShortStack may have saved Ford’s agency from training and paying their own staff to take on that large piece of their contest, saving them money in the long run.

The ability to negotiate is also a great way to get more bang for your buck. Is the contest you’re looking to run something you’re projecting to do every year? Perhaps you can negotiate a three-year contract for a fraction of the cost of a one-year deal, especially if your contest doesn’t have to be re-built from scratch every year.

Someone who will hand over the reigns

Although you’ve decided not to go the DIY route, it may be more convenient to your business to have a certain level of access and ability to edit the campaign in a user-friendly interface. For example, if you need to update a leaderboard, or make other changes based on the contest’s progress, being able to access the back-end of you contest may be just what you need.

Also, make sure to understand who will own the contest once you’ve paid to have it built. If you can take over ownership, and get access to a user-friendly back-end to make changes to it, perhaps you can re-purpose the contest and re-use it in the future.

Someone manning the bat phone

The industry standard for Help Desk responses is 24 hours. This means, if you send an email to a company asking for help, on average, it could be a whole day until you hear back. And the first response to a support request often includes more questions and not necessarily a solution. This means, when working with many companies, if there’s a problem, it could be days before the issue is resolved.

ShortStack helped Tootsie build and maintain this Halloween campaign. They were available throughout the contest’s duration answering questions and resolving any issues that arose.

When running a contest or giveaway, you don’t have days to waste. If a technical issue arises, especially one that’s causing a barrier to entry, it’s heartbreaking to see your participation rate dwindle. This is why it’s so important to understand the level of support you can expect if something goes wrong. It’s best to work with a company that offers support outside of regular business hours, and responds (much) faster than the industry standard of 24 hours. Some companies will even assign you a dedicated account representative that you can call on day or night.

Jessica Miller helps ShortStack customers get started, and get the most out of our platform by creating "how to" tutorials. She also recommends strategies for customer success. Read more articles by Jessica Miller.