Do you have an event coming up that you need to generate some buzz for? Adding social media to your promotion strategy is the best thing you can do for you and your event.

Why is this the case?

According to Hootsuite, “The great thing about social media is that the size of your event doesn’t dictate the level of success you can achieve by incorporating social. Whether you’re organizing a networking event with a hundred industry professionals or a music festival with thousands of attendees, social media can help you get the word out and connect with your audience.”

Partner the power of social media with the possibilities when using a marketing campaign to promote your event, and you have a recipe for success.

Using a campaign to promote your event allows you to take your promotion a step further and offer an incentive to attend your event and even an opportunity to grow your email list and learn about your attendees.

1. Offer an Incentive: Whether it’s a free ticket, a guest pass, or a chance to arrive at the event before anyone else, the easiest way to attract attention to your campaign and your event is by offering something special. A free pass to your event is the most ideal prize as it will attract more people to sign up for a chance to win.

2. Learn a little more: Promoting an event is the perfect time to learn more about your potential attendees. In the example below the Great British Beer Festival is giving away 100 free drinks to their beer festival in exchange for visitors saying which beer they’re most looking forward to taste. By asking this simple question, they’ll not only garner some engagement but they’ll learn what types of beer their fans are most interested in. They can take their results and tailor next years event to fit their fans’ needs, or they can do some follow-up marketing that involves their fans’ favorite beers.

4. Provide a link to more information: Chances are people will land on your campaign without having heard of your event before, so it’s best to include the top details for the event on the campaign and link out to additional information. For example, your campaign should mention the name of the event, location and time. After that, consider adding some additional links to the event website, vendor list, or event details.

The Great British Beer Festival is a festival located in Olympia, London held by the Campaign for Real Ale (CAMRA). As UK’s biggest beer festival they feature more than 350 British breweries across 27 different bars. The festival has built a marketing campaign to promote their event and give away 100 free drinks to the beer festival. They’re asking fans to tell them which beer they’re most looking forward to be entered to win. The Great British Beer Festival Campaign is simple, to the point, and contains all the elements of a successful Campaign. 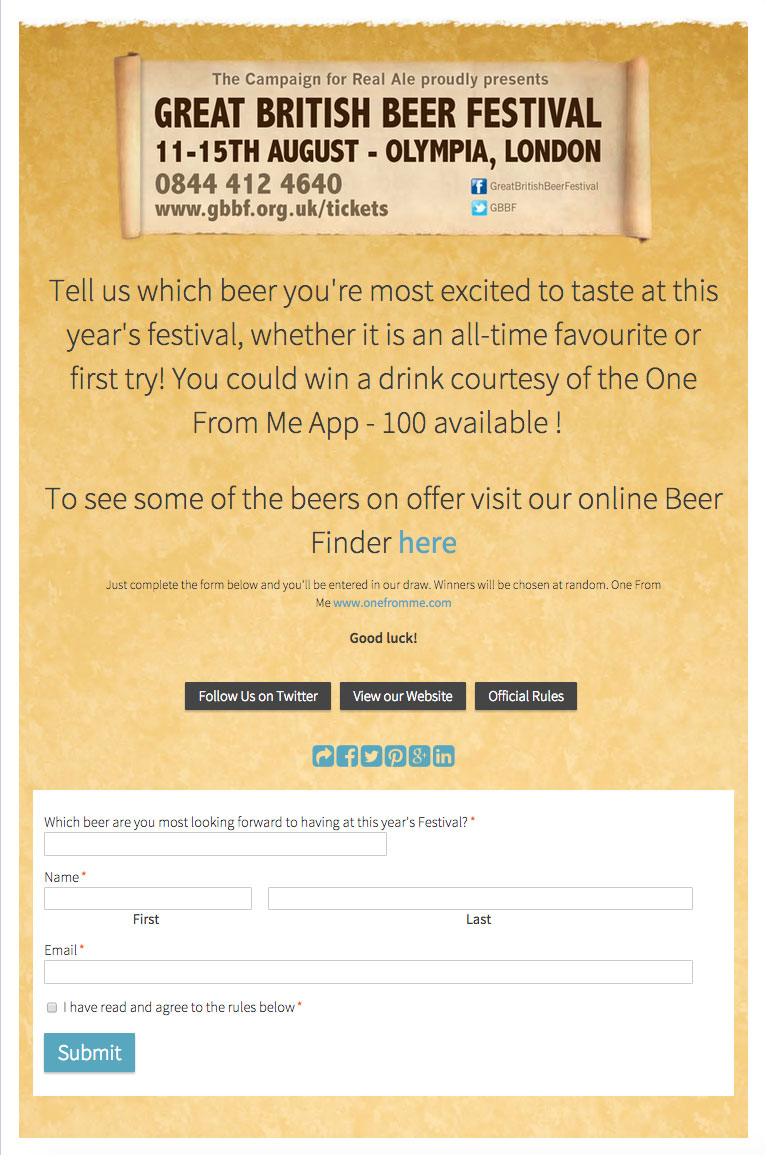