A Powerful Super Bowl Marketing Strategy: Create Your Own Game

Super Bowl commercials ran advertisers about $5-million a pop last year. If you’re reaching for your checkbook now this post probably isn’t for you.

We’re going to look at a different marketing strategy today and it’s bound to cost you approximately $5-million less.

No, you won’t appear on television’s most-watched broadcast or achieve 150-million views with these tactics. But you can cash-in on the popularity of the NFL’s ultimate showdown in a variety of ways:

Gamify—Show your customers a good time

Do you know the term “gamify?” The word is a 21st-century addition to the English lexicon and refers to the incorporation of game elements to motivate participation.

According to Merriam Webster, “Gamification is effective because it taps into people’s natural desires for competition and achievement.”

A study published in 2014, Shallow Gamification—Testing Psychological Effects of Framing an Activity as a Game, claims: “Gamification techniques are intended to leverage people’s natural desires for socializing, learning, mastery, competition, achievement, status, self-expression, altruism, or closure, or simply their response to the framing of a situation as game or play.”

And now back to the Super Bowl. Who’s game for gamifying?

You don’t need to be in the sports, entertainment or the gaming business to gamify your marketing. Any company can put the strategy in their playbook.”

Last year, in an effort to closely examine what types of businesses ShortStack serves, we crunched numbers regarding our customer base… 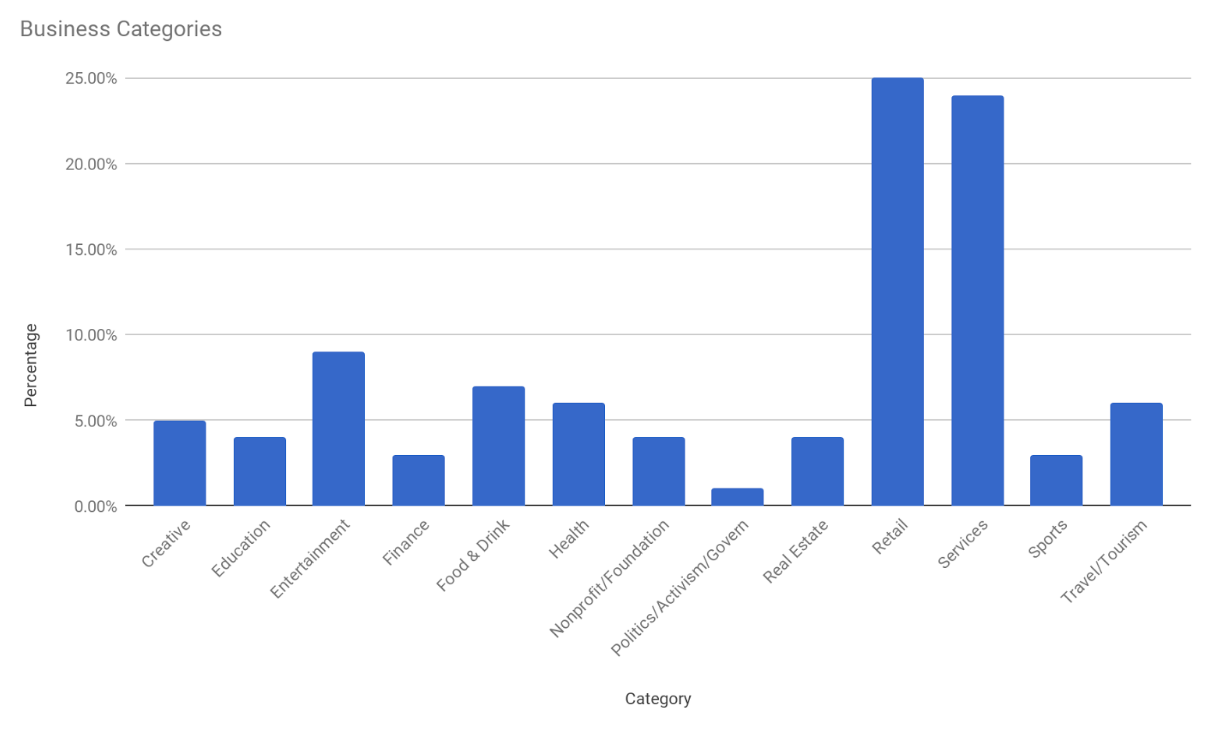 Did you find one of the categories above relevant to your brand? Excellent.

Next, I’m going to present a generous sampling of ShortStack templates you can use to create a game, contest, quiz, or something fun leading up to, or following, the big game. I’ll also draw from the some of the industries listed above in an effort to help you brainstorm a relevant Super Bowl marketing strategy for showing your fans a good time on social media.

Perhaps no tactic is more easily attached to the Super Bowl than playing a “Guess the Score” game. As you see in this template, it’s a practical strategy for a sports brand, however, there’s really no reason other types of businesses might not want to call this play. Simply offer a relevant prize. 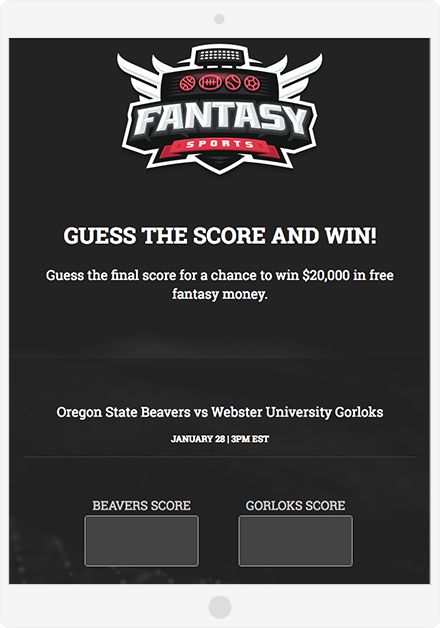 The “polling” template below encourages viewers to cast a vote and share it.

You might call for fans to pick a winner early in the post-season when 12 teams enter the playoffs, after the league championships—when the Super Bowl competitors are determined—or any round in-between. 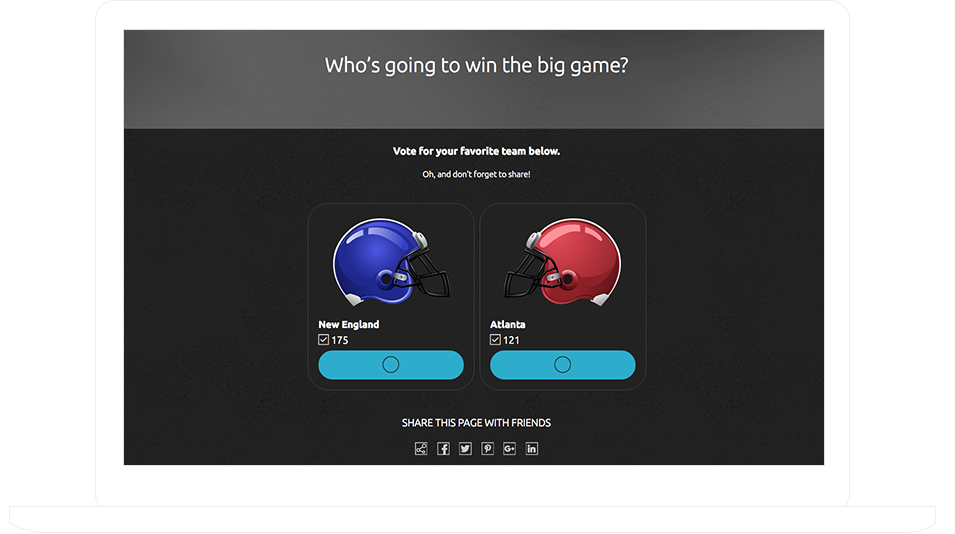 No, the items featured below aren’t NFL-branded. They don’t need to be. The popular “Win Your Wishlist” game can apply to your business however you choose. 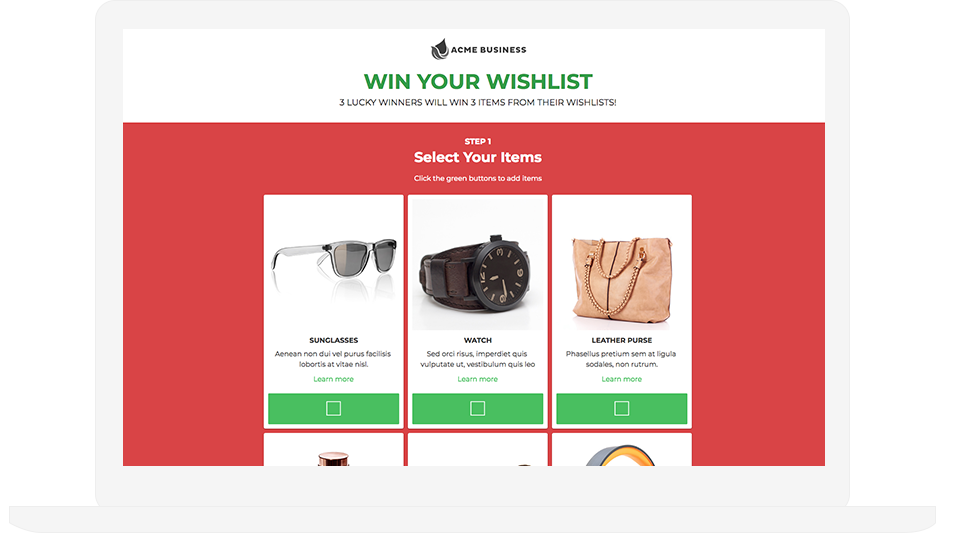 Instagram and Facebook fever, along with the ubiquity of the smartphone, has made photo contests enormously popular across most age groups.

Marketers love photo (and video) contests not just for their magnetism, but also because they result in free and fun content. The user-generated content may live a life of its own on social media or be collected and re-used by the brand (on product pages, in emails, etc.).

How could you run this gamification play? Ask contestants to: 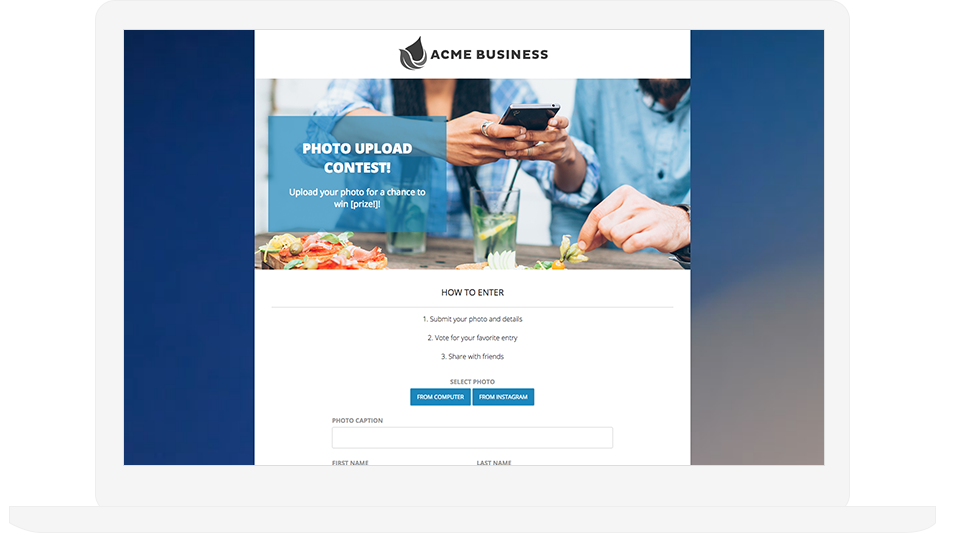 The web has shown us people love to play a quick game of “assess yourself” and get immediate feedback. Marketers use ShortStack templates to make all kinds of personality quizzes, assessments and even trivia contests.

The [blank] below would likely be filled in with “sport,” but let’s brainstorm a few other fun Super Bowl related ideas… 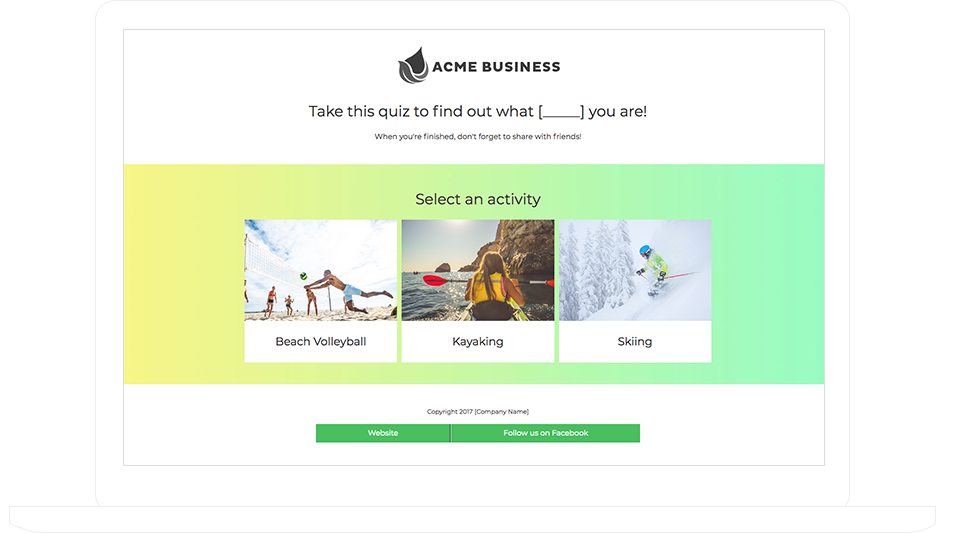 The placeholder image below obviously suggests how a pet brand could conduct a photo caption contest. Perhaps your pooch sports a bandana representing an NFL team. Where else could you take the idea for the Super Bowl?

And so on. I want to also point out your photo caption contest could include a “vote for your favorite” element. So in addition to engaging participants a first time by writing and submitting a caption, everyone can be invited back to cast a vote. More engagement = more connection with your brand. 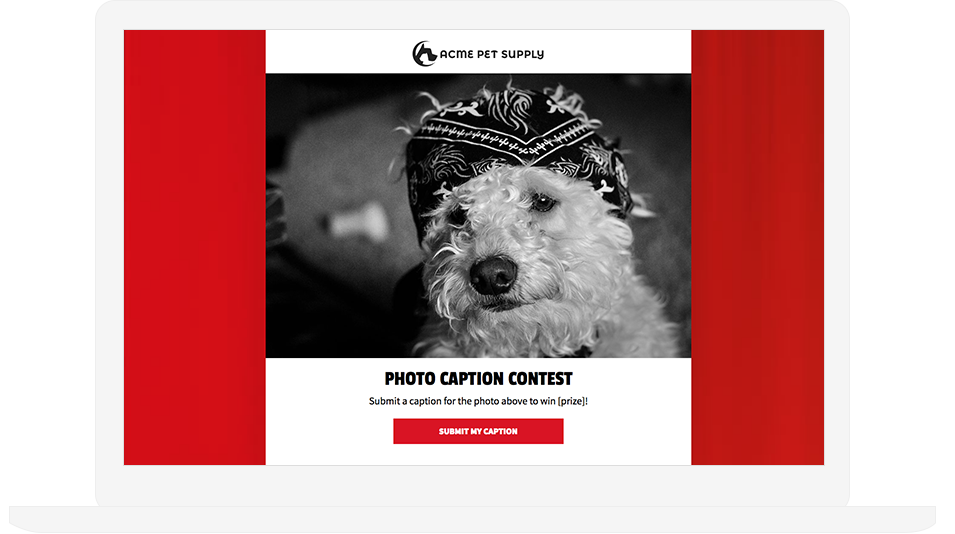 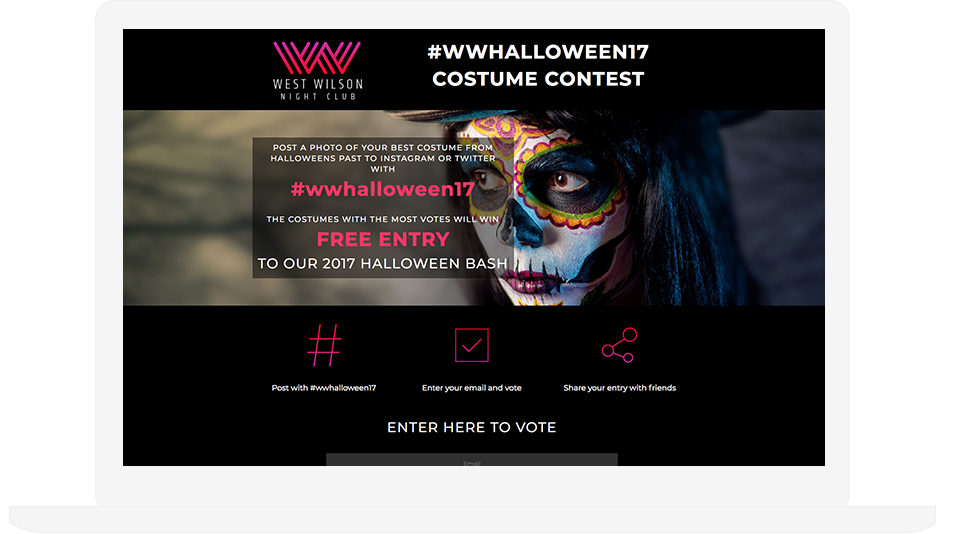 Wait… What? Why would we place a template for a Halloween contest here? We’re talking about the Super Bowl, right? Well, again, you’re looking at a template. Templates are made to be customized. So let’s pour a little frozen cheese on this one. (Ew.) 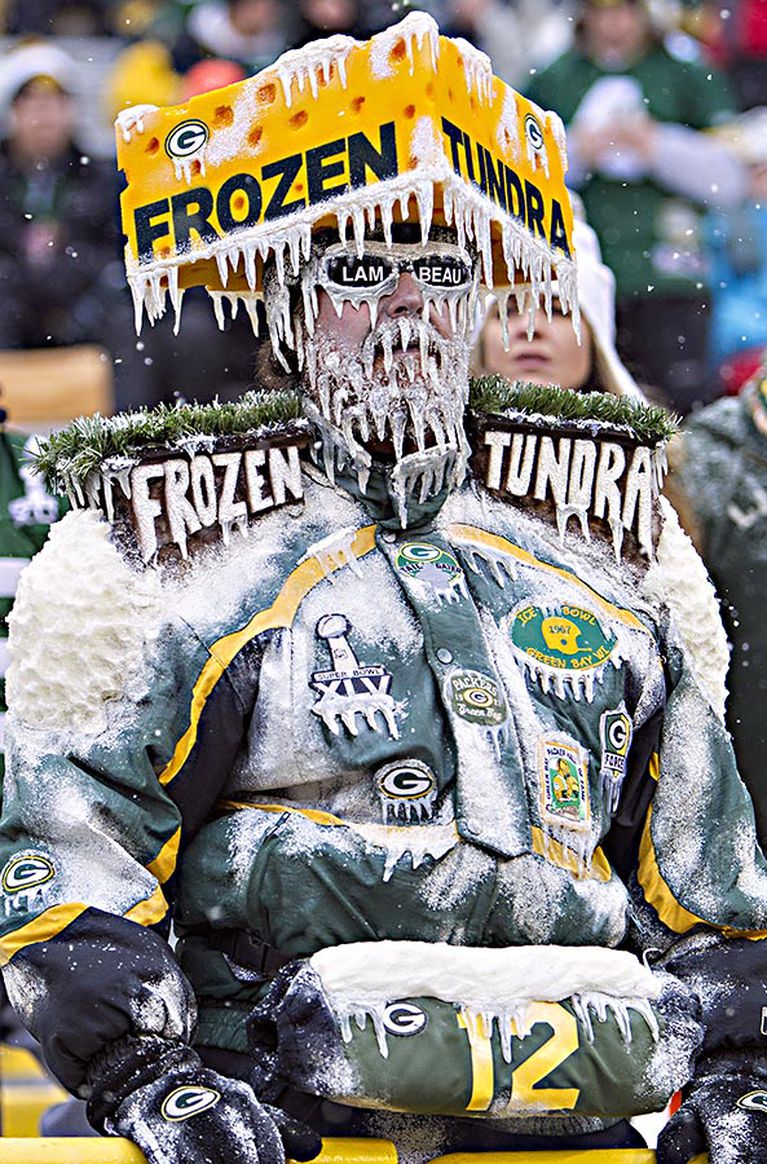 Um… yeah… Some fans get into into dressing up for the game. So you could have some fun with a costume contest:

Or maybe your contest asks for submissions about:

You can make the world’s easiest game simply by conducting a giveaway. 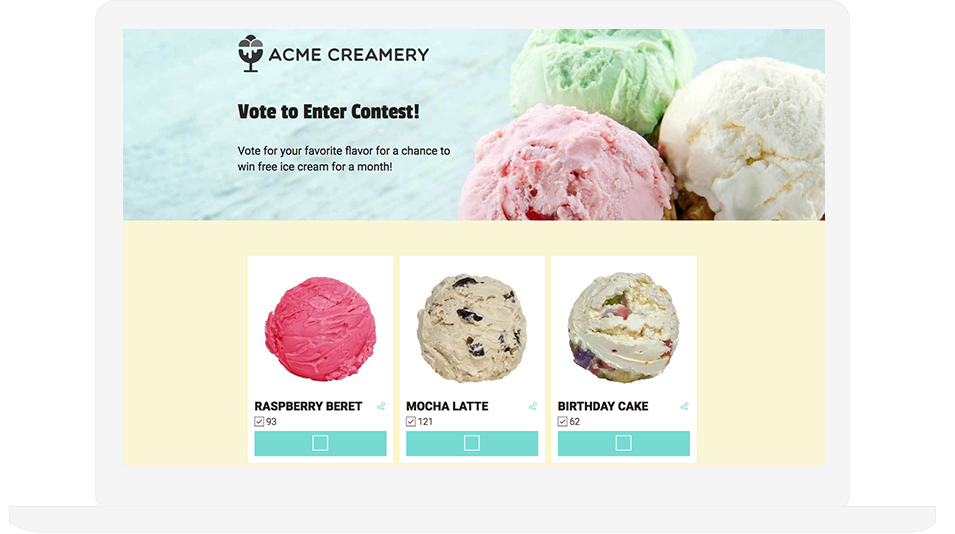 Okay, our “vote to enter” template shows three ice cream flavors. However, given all the ideas we’ve tossed around thus far, I’m sure you gather how simple it would be to vote for a variety of things related to the Super Bowl. Then…

Or maybe you do sell ice cream. Run with it with some cool (maybe temporary new flavors):

What if you actually do have millions to invest in a Super Bowl commercial?

You could—and probably should—add a social media component to complement your TV ad to help rally fans and followers before, during and after the game all across the digital arena. That’s precisely what M&M’s (a Mars Wrigley Confectionery brand) is doing for Super Bowl LII (52). If their TV spot is a touchdown, their dance contest is sure to be a 2-point conversion. 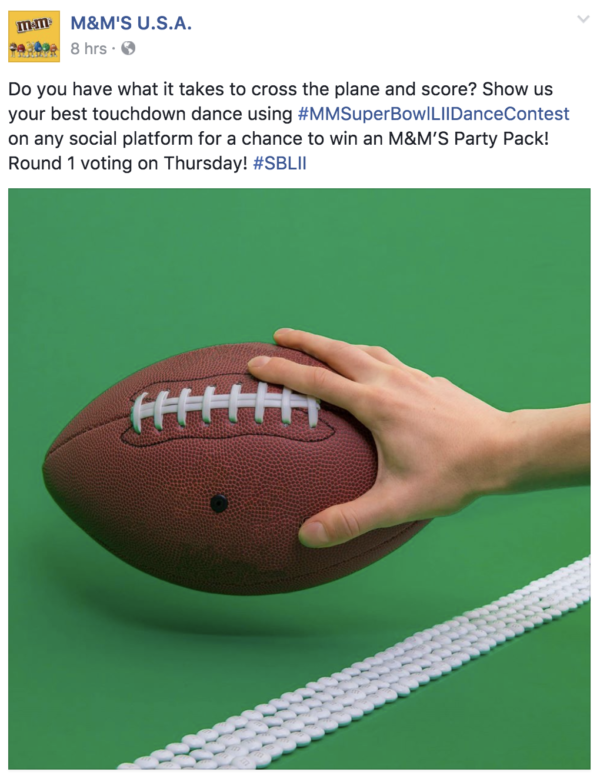 I want to show you the entries as well as the results of fan voting, but at the time of writing, the contest has just begun. If you’d like to see how contestants have chosen to shake their bodies—with M&M’s packages in hand—search #MMSuperBowlLIIDanceContest.

It should be fun.

Kick off something fun

Understand: the Super Bowl, the NFL, or sports at large, brings out the passion in people.

Well more than 100 million people watch the Super Bowl. They’re exposed to commercials from 50 or more brands that can somehow afford and justify buying airtime. But almost everybody is touched somehow by the hoopla surrounding the event. It’s fair to say Super Sunday borders on a national (or international) holiday.

As you’ve learned, you need not buy commercial time on the broadcast to attach your brand to the amazing fervor the game ignites each winter.

If putting a sports spin on your marketing sounds fun to you, it’s bound to sound fun to your prospects and buyers too.

You can gamify your marketing for free by creating a ShortStack account and using one of the templates offered.

Or you can contact the ShortStack custom services team to schedule a free consultation. They’ll run—or throw—all kinds of ideas at you and help you kickoff an exciting promotion around Super Sunday.

Try a ShortStack template to create your first contest fast and easily.

Barry Feldman is a content consultant for ShortStack. He is the author of several books and contributes to many of the web’s top marketing sites. Barry was named one of 25 Social Media Marketing Experts You Need to Know by LinkedIn. Read more articles by Barry Feldman.