Camp Chef makes camping grills, portable stoves and smokers, and other equipment for outdoor cooking. They’ve built a devoted following on social media, especially on Facebook and Instagram, because they feature yummy recipes and cooking-demo videos. (In fact, I’m afraid to link you to Camp Chef’s Instagram for fear you’ll get lost in their beautiful feed! Okay, here it is,  just promise you’ll read this entire post before you check it out.)

The holidays tend to be a slow time of year for Camp Chef — after all, summer is the season for camping. So to boost sales during the Christmas season, Tom Broschinsky, the company’s multimedia communications manager, conceived of a multi-day holiday giveaway based on an Advent Calendar. He planned Camp Chef’s “12 Days of #FeedYourOUTside” giveaway to help him meet a few goals. “My top goal was to add at least three thousand addresses to our email list,” says Broschinsky — which meant adding three thousand names to his existing list. “I also wanted to increase engagement during a slower time time of year for us, and to build awareness about many of our products that aren’t just for campers.” 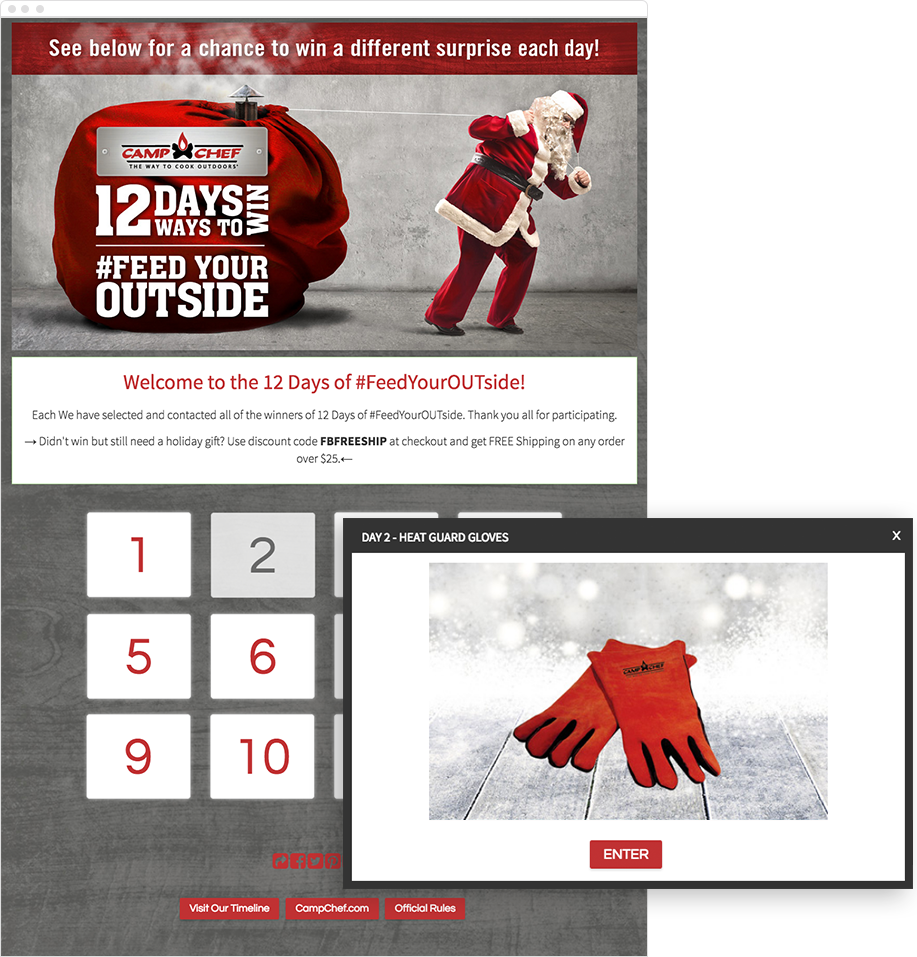 This was built with ShortStack’s Multi-Day Giveaway Calendar Template

To help Broschinsky accomplish all three of his goals, he decided to offer prizes that got more valuable as the days passed, the idea being to build excitement. “The first day’s prize was a spatula, and on the last day the prize was a thousand-dollar grill,” says Brochinksy. People were allowed to enter the giveaway once a day.

Camp Chef gradually asked for more information from contest participants as the 12-day giveaway progressed and the prizes increased in value. For the less expensive prizes, people entered by sharing their email address, but toward the end, Broschinsky asked for a telephone number and zip code — demographic data the team could certainly use for future marketing.

And his tactic certainly got some momentum going: For the first 11 days of the giveaway, Camp Chef averaged about 5500 entries but on the last day, they got almost 16,000! 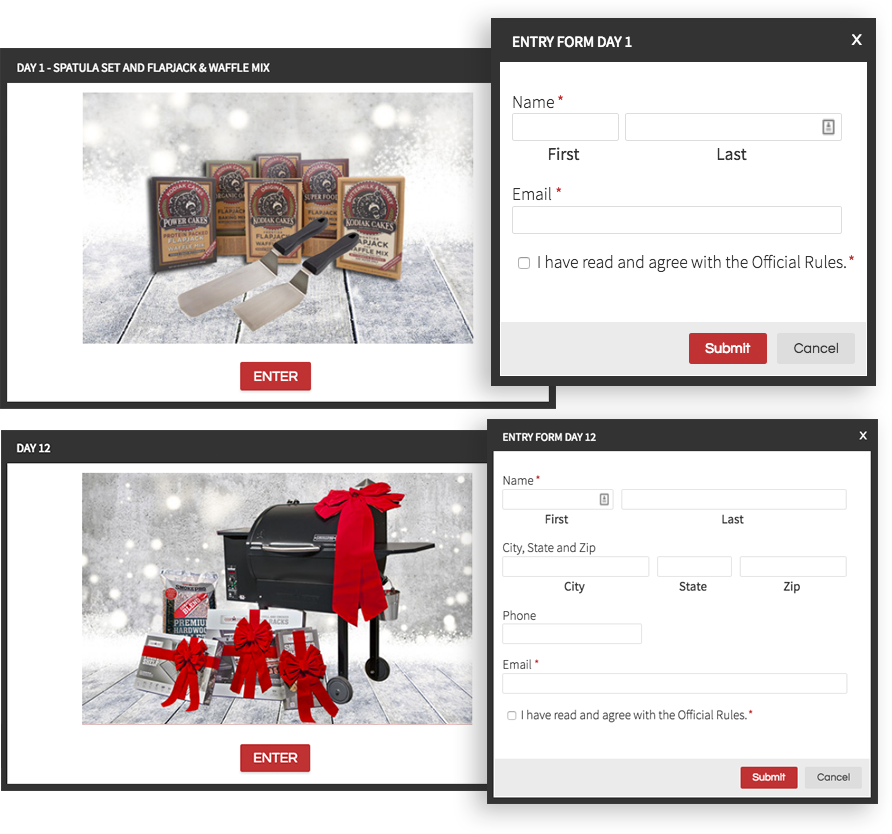 The value of prizes increased each day, and so did the information participants were asked to give

Broschinsky started with ShortStack’s Multi-Day Giveaway Calendar  template and added just a few widgets. He enabled the Refer-a-Friend feature which awards extra entries to people who share a link to the campaign. “We had some entrants who shared their unique referral link with 25 people, which really expanded the reach of our campaign,” he says. He also added links to the company’s Facebook Timeline and to a landing page where Camp Chef posted the rules for their contest. 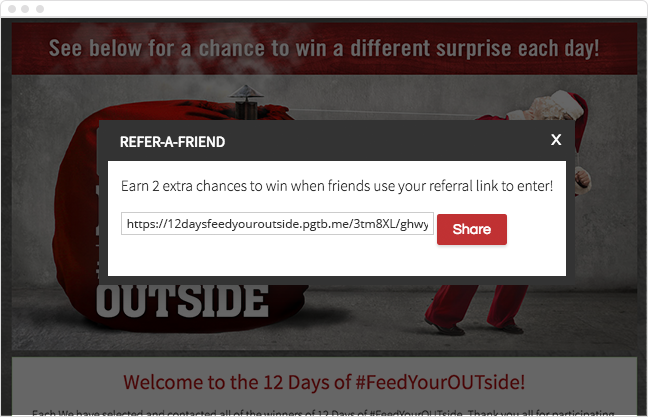 Using ShortStack’s Refer-a-Friend feature, participants were given incentive to share the campaign with their friends

Getting Twice the Open Rates with Email Autoresponders

Camp Chef was one of the first brands to use ShortStack’s email autoresponder feature. “I could have integrated the 12-day giveaway with our existing email provider, but it was so much easier to just keep it all within ShortStack,” says Broschinsky. It was also an effective way to get in touch with everyone who participated in the giveaway. A typical email marketing campaign for Camp Chef sees an open rate between 14 and 20 percent, “But for this campaign, we had 76,866 entries and our open rate was 40 percent!” says Broschinsky.

“Upper management was blown away by my numbers,” he says. During the course of the 12-day campaign, Broschinsky also learned something valuable about Camp Chef’s audience: “Sending daily emails didn’t negatively affect the giveaway, or our weekly email send,” he says. In other words, people didn’t unsubscribe even when they were getting daily messages, so it gave Broschinsky’s team lots of opportunities to share marketing messages — including sale announcements — while the giveaway was running.

On Facebook, businesses like Camp Chef are competing for attention against hundreds and thousands of brands, he adds, so it’s especially difficult to stand out during the holidays.  “But in email, you’re competing with maybe 10 or 15 companies that are sending on the same day you are, so email is a really productive channel for us,”  Broschinsky says. 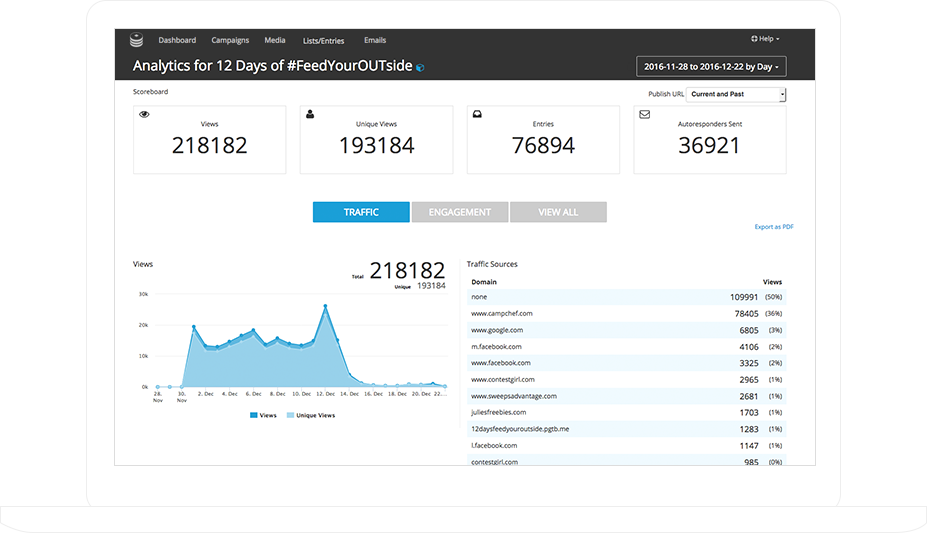 Now that ShortStack users have the ability to send scheduled emails, Broschinsky has even more to love about our marketing automation tools. 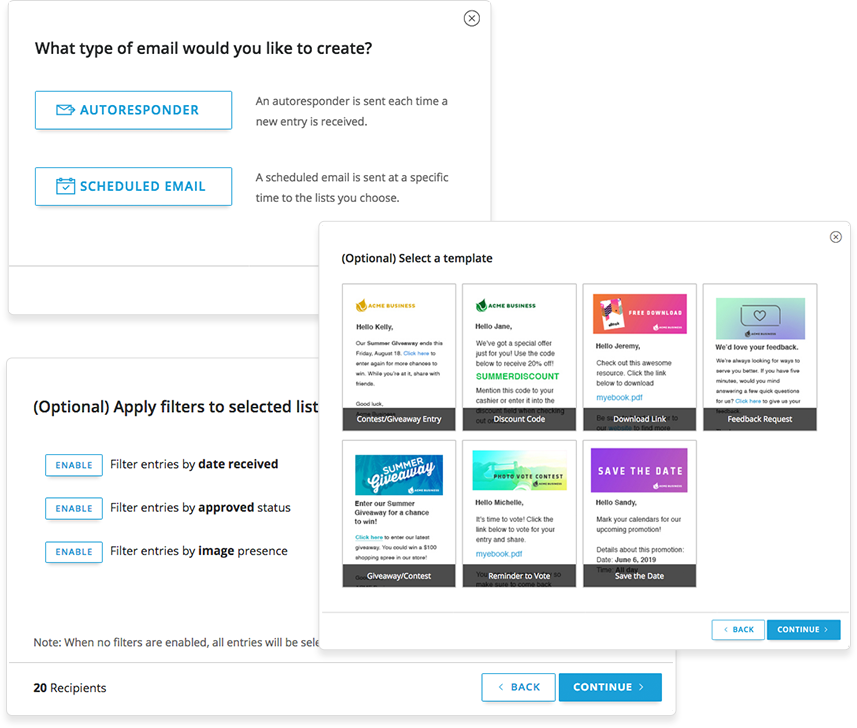 Broschinsky is convinced that enabling the Refer-a-Friend feature saved him a ton of money in advertising costs. “When ever I posted on Facebook, I’d put about twenty-five dollars behind it to get the momentum rolling, but for the most part, our followers did the work for us,” he says. “I don’t think I spent much more than two or three hundred dollars on advertising total, because with Refer-a-Friend I knew people would keep coming back to see the next prize and to enter again, and then come back again to see if they’d won.”

Another smart thing Broschinsky did was share a special offer with everyone who had entered the giveaway. When the contest wrapped up, and the last prize had been awarded, the Camp Chef team posted a discount code for free shipping. Everyone was a winner!

Camp Chef posted a discount after the contest was over, making everyone a winner

“I’ve been using ShortStack for about five years, and before that I used North Social,” says Broschinsky. “And even though I’m rusty with CSS and HTML, I can take an existing template and make it look exactly how I want it to look, and get us to our goals.” Broschinsky and Camp Chef run a ShortStack campaign just about every month, from Instagram contests and Facebook giveaways to landing pages where Camp Chef gives away ebooks like their “Thanksgiving 101” cookbook.

“I’m loyal to ShortStack partly because when I look around and look at what other companies charge for what I’d get, I say ‘No way.’,” he says. “But more than that, ShortStack offers way better customer service, and is continually adding new features,” Broschinsky says. “All the campaigns we build are mobile friendly, we can publish them as microsites, and you have tools like the Comment/Like Importer tool that are just awesome,” he adds.

In fact, Broschinsky says he uses the Comment/Like Importer three to four times a month. “On one recent Facebook Live video I had 340,000 views, 8000 likes and 4600 comments…that’s one video. “Having the option to import all that data is just amazing,” he says. 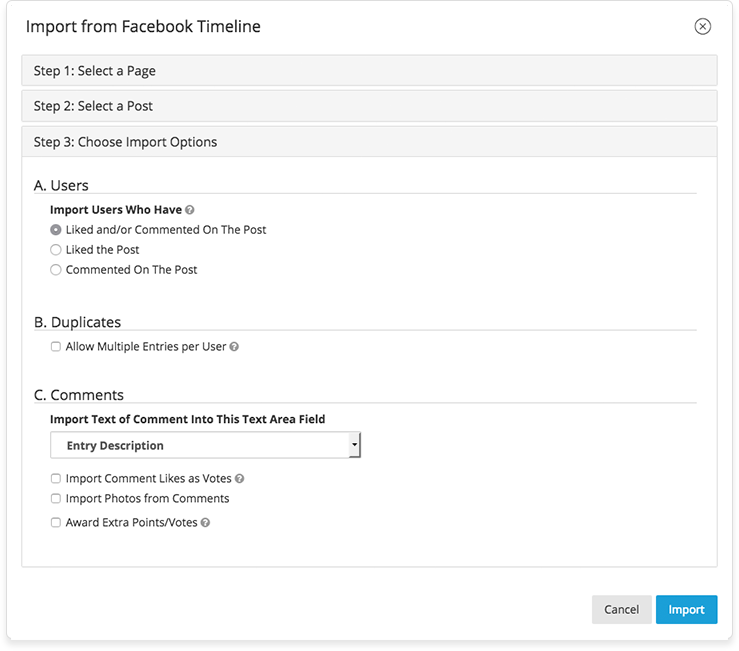 Import Likes and Comments directly from your Facebook posts with ShortStack

Camp Chef is a seasoned ShortStack user. They run frequent contests and giveaways, but they also have some campaigns that run all year round including a recent month-long giveaway that brought in 20,000 entries, and a one week-sweepstakes that brought in another 4,000. If you want to learn more about ShortStack’s “advent” calendar giveaway, or talk to us about other ideas that will help you reach your goals, our design team is standing by.