Perky-Pet recently wrapped up a giveaway that helped the company build a new targeted email list: bird watchers. Here’s a look at what their goals were when they set out, and how they used ShortStack to meet them.

What was the “problem” you were trying to solve with your Campaign?

Perky-Pet, a sponsor of the Cornell Lab of Ornithology’s West Texas Hummingbird Web Cam, wanted to increase awareness of the cam and get people excited about watching and learning more about a wide variety of hummingbird species in a unique setting.

The cam is located in the mountains outside Fort Davis, Texas, at an elevation of over 6200 feet. This site hosts a total of 24 Perky-Pet Grand Master hummingbird feeders and during peak migration can attract hundreds of hummingbirds from a dozen species that are migrating through the arid mountains.

What were your goals?

Beyond increasing awareness and boosting engagement with the cam, we also wanted to educate people on how to properly feed hummingbirds and care for their hummingbird feeders. We created a landing page on birdfeeders.com that included access to the cam as well as a downloadable PDF entitled “Getting Started with Hummingbirds.”

We also wanted to develop brand advocates by engaging users with a unique experience (watching the cam) while giving them the opportunity to engage in a fun, low-barrier to entry sweepstakes with the chance to win a prize. (Three $50 Visa gift cards were awarded each week of the 4-week campaign.)

Another campaign goal was to gather new leads (opt-in email addresses) that could be added to the current email list.

How did you fulfill them using ShortStack?

We created a fun, interactive campaign using ShortStack’s “Vote to Enter Sweepstakes” template. We featured six photos from the web cam and named the hummers after famous Hollywood stars (“Richard and Elizabeth” and “Clark and Grace” ….). To enter the sweepstakes, fans were asked to cast their vote for their favorite cam star.

We wanted to give our fans a way to increase their odds of winning, while simultaneously boosting engagement in the ShortStack campaign. We accomplished this by giving fans the opportunity to cast their vote for their favorite cam stars once a day, every day, for the duration of the sweepstakes. (We were able to set how often people were allowed to vote by creating a custom ShortStack entry form) The more they voted and entered the sweepstakes, the better their odds of winning.

In order to generate email leads, we added a custom ‘check box’ field to the entry form, incorporating the ‘checked by default’ ShortStack feature. Sweepstakes entrants could elect to join the Perky-Pet mailing list to receive occasional emails with expert bird feeding tips and special offers. Entrants who didn’t want to join the list or already subscribed, could uncheck the box.

Throughout the duration of the 4-week campaign, we ran Facebook ads/boosted posts to drive awareness of the campaign and increase engagement with the sweepstake and cam. 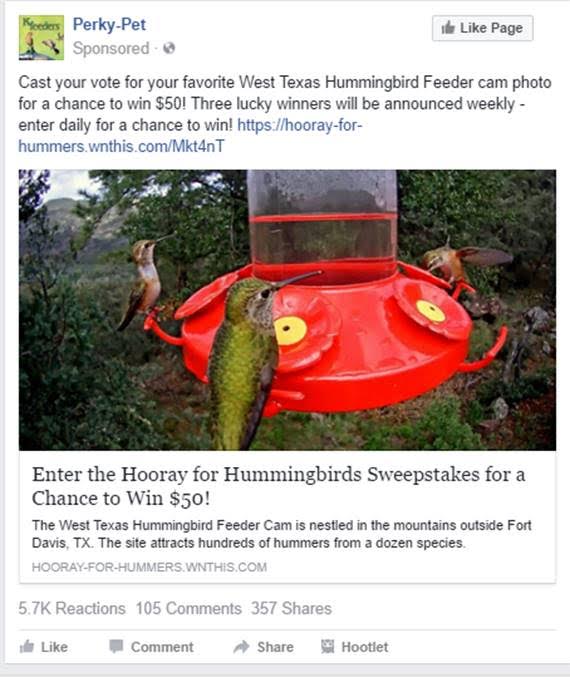 To help spread the word about the sweepstakes, we successfully reached out to several large, reputable sweepstakes websites and asked them to share the "Hooray for Hummingbirds Sweepstakes" on their website.

What was your advertising budget?

Perky-Pet didn’t want to divulge their ad spend but here are some results from the Facebook ad campaign:

What was the result of your Campaign?

Hummingbird Cam Views and Watch Time from August 29 to September 25:

How will you use the information you collected with your campaign?

We added the new email subscribers to the current Perky-Pet list. Emails are a key communication tool for Perky-Pet. They have a very robust ecommerce business (in addition to their national retail distribution) and they send out weekly emails with online specials, birding tips, etc., so growing their email list is always a key goal.

We analyzed the results of our FB ad campaign and learned that women aged 45+ were the most engaged campaign users. We also learned that the majority of people who entered the contest entered via a mobile device vs. desktop. We were also able to pinpoint the regions of the country where most users were from. All of this will be valuable information for future campaigns.

What were your favorite things about using ShortStack?

There’s much to like! I like the variety of templates available and the fact that you can easily customize them and the entry forms to fit your particular needs. I also think the online support is fantastic – special kudos to Jane and Ashley!