How to Track the Conversions of Your Campaign’s Facebook Ads

January 18, 2016: Facebook’s Conversion Tracking Pixel has changed and this article is outdated. Please reference our most current article for adding the Facebook Pixel to your Campaign.

Campaigns are usually more successful when you spend some money to promote them. One of the most popular (and cost effective) ways to get the word out about a Campaign is to invest in Facebook ads. But how do you truly know if your paid advertising efforts are resulting in Campaign conversions? We have the answer to this commonly asked question.

Go into your Ads Manager and do the following:

2. Click “Create Pixel” to create your tracking pixel. Next, use the drop-down menu to select your “Category” and give your pixel a name that’s related to your Campaign.

3. Copy the code that Facebook gives you (in step 2 you will embed it into your Campaign using ShortStack’s Code Widget). Until your code has been placed, its status will be “Unverified.” 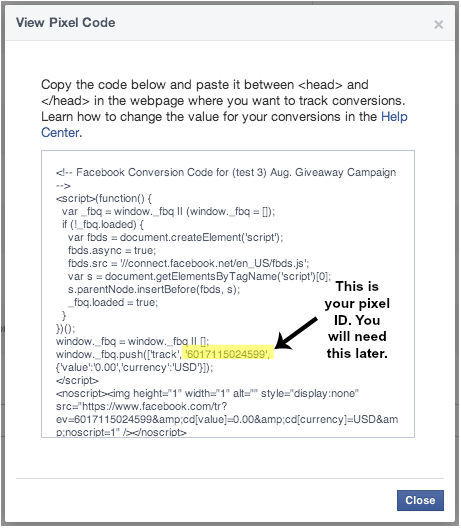 Step 2: Set Up Your Campaign for Conversion Tracking

Now that you have your conversion pixel, the next step is to verify it. Before you can verify it, however, you must decide what type of conversion you want to track. In this resource, we’re going to cover two types of Campaign conversions: leads and registrations.

• A “lead” is a user who lands on your Campaign after they have clicked on your Facebook ad.

• A “registration” is a user who completes (or submits) your Campaign’s promotion form after they have clicked on your Facebook ad.

Note: For this post, it’s easiest to use the terms “lead” and “registration” to describe these actions, but you can define these terms for yourself. For instance, a “lead” to your business could mean when a user downloads a resource from your Campaign.

Because we’re tracking conversions on a Campaign — not on a traditional website — you have to use ShortStack’s Code Widget to manipulate when your conversion tracking pixel fires to track a conversion. Let’s walk through a couple examples:

How to Track Campaign “Leads”

Tracking leads (the number of people who visit your Campaign as a result of a Facebook ad), is simple. Open up your Campaign within ShortStack’s Campaign Builder and click on the Code Widget. In the Code Widget, paste your conversion tracking pixel (the piece of code Facebook provided you in step 1) in the open field. Click “Save & Exit” and you’re done! 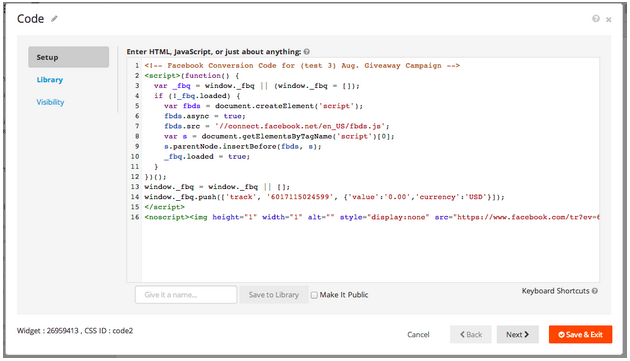 To verify your tracking pixel, publish or refresh your live Campaign. Now go back into the Ads Manager, and under their “Conversion Tracking,” confirm that the status of your Campaign’s tracking pixel is Active (green).

By pasting your exact conversion tracking pixel on your Campaign using the Code Widget, your pixel will fire each time a user lands on your Campaign. So what happens when you don’t want your conversion pixel to fire until a person has completed an action on your Campaign? We’ll explain this in the next section.

How to Track Campaign “Registrations”

After a user successfully enters your promotion, you might want to reveal a hidden Rich Text Widget (or some other kind of Widget) thanking them for entering. Our Action Widget was specifically designed to handle these “if this then that” scenarios. Now that our Action Widget is configured, let’s setup our code snippet. 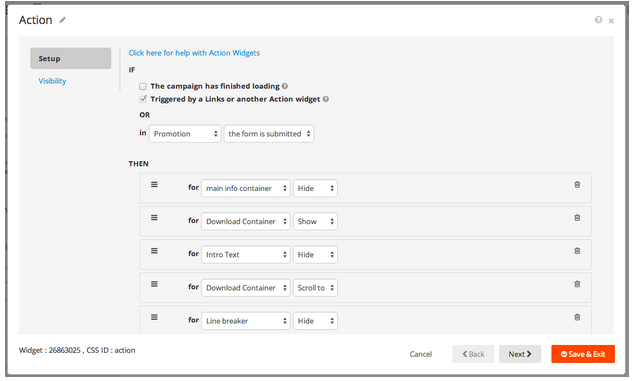 As you can see, there are two values highlighted in the code snippet shown below. The first is your Facebook pixel ID — which you can find in your pixel code — and the second is the CSS ID of the Widget you want to show when a user enters your promotion; in this case, our Rich Text Widget.

To find a Widget’s CSS ID, hover over a widget in the Layers Panel. In the help pop-up that appears, make a note of the bold word with the hashtag in front of it. This is the CSS ID (hashtag included!).

Replace the pixel ID and CSS ID in the code below with your own. After you’ve edited your code snippet to include your Facebook Pixel ID and the Widget ID with your specific values, copy and paste it into the Code Widget. Click “Save & Exit” and you’re done.

To verify your registration pixel, in addition to refreshing your Campaign you must also give your Campaign a test run, i.e. go through the exact steps a user would take on your Campaign. Because you set up your pixel to fire once an action is taken, this is crucial step in verifying your pixel. It’s best to publish your Campaign to a “Sandbox” page to do your testing.

What’s a Sandbox page? If you would like to do some testing before installing to a company Facebook page, you can create a Test Page in Facebook (we call this a Sandbox environment) that you install your apps to for testing purposes. It’s like creating a Page for your company, but this Page does not have any fans so you can test and tweak without anyone seeing it (or only sharing it with specific viewers).

We know this part can be a bit tricky. If you need help, email us at theteam@shortstacklab.com.

Now that you’ve created and successfully placed your tracking pixel on your Campaign, it’s time to create your Facebook ad. To create a Facebook ad that tracks your Campaign’s conversions, follow the these steps:

1. Go into the Ads Manager and in the top right corner select “Create Ad.” 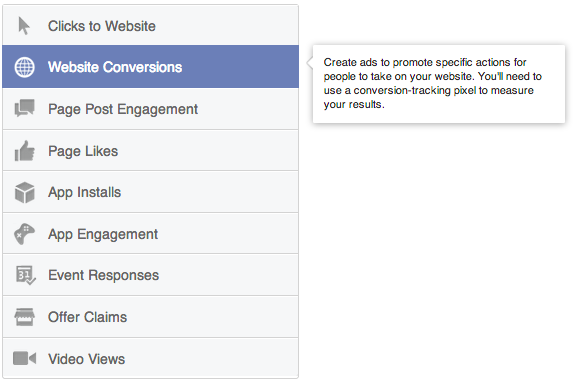 3. Paste your Campaign’s URL (make sure it contains pgtb.me in it) in the open field and select your tracking pixel in the drop-down menu. 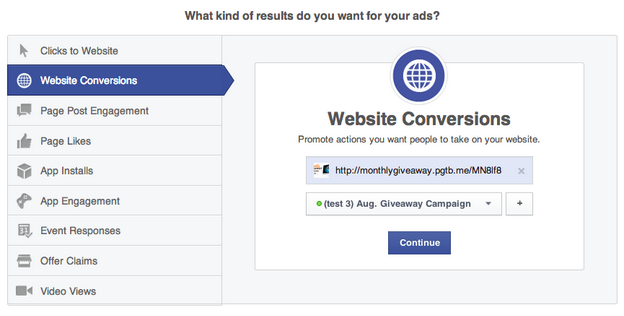 4. After you’ve pressed “Continue,” customize your ad as you normally would.

Note: You can follow these same steps in the Power Editor, the process will just look different. Under the Power Editor’s “Creative” tab, choose “Website Conversions” as your ad objective and select your conversion tracking pixel by clicking “Use Existing Pixels.”

Here are some important things to keep in mind when recording your ad’s Campaign conversions:

1. When recording “lead” conversions of your Campaign in the Ads Manager, it’s likely your ad’s “conversions” will not equal its “clicks.” Clicks, according to Facebook, is the total number of clicks an ad receives. If you’re promoting a Page, event or App, clicks also include Page Likes, event joins or app installs that came from your ad.

What this means is that a user can “click” on your ad without being directed to your Campaign, preventing your conversion pixel from firing. For this reason, it’s common for an ad to have more clicks than conversions. 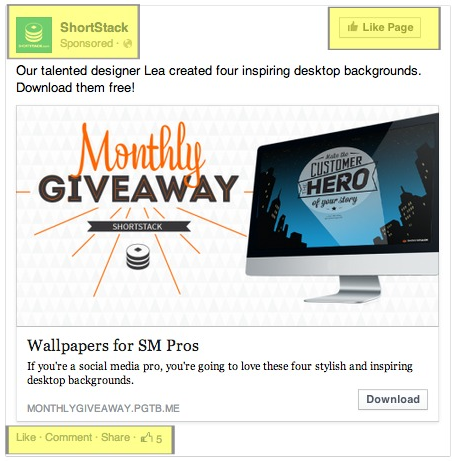 If you are tracking “registration” conversions, go into ShortStack’s Forms & Promos dashboard and click “View Entries” next to your Campaign. Next, take your total number of Campaign entries and subtract it from your ad’s conversion metric found in the Ads Manager. Again, the difference will be your Campaign’s number of organic conversions.

3. To discover advanced data about your Facebook’s ad(s), click the “Reports” tab on the right-hand side of the Ads Manager. In the reports tab, click on the “Edit Columns” button. When the pop-up appears, select other metrics you would like to know about your ads. 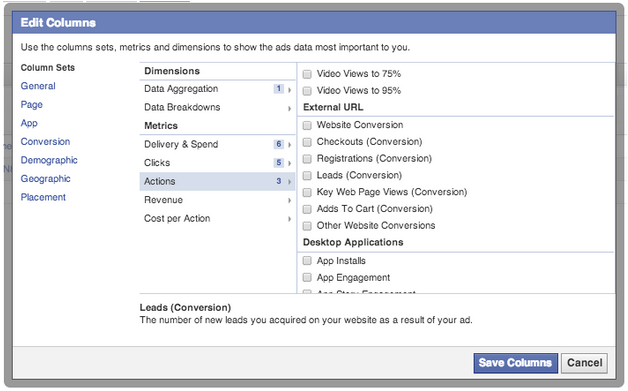