Avoid The Most Common Mistakes Marketers Make with UGC Contests

Hosting a contest or giveaway designed to gather user-generated content (UGC) is a great play for brands of all sizes. After all, UGC is the gift that keeps on giving. It’s immediately beneficial — acting as a social testimonial as soon as it’s shared by the people who enter — and then providing long-term value when the brand shares the content on their site and social channels.

And since many users are more than happy to create content for brands they love, offering them an incentive to do so is a win-win for brands and customers alike.

So why aren’t all businesses hosting incredible UGC giveaways and crushing the competition with the results? While a decent chunk are giving it their best shot, a number of businesses running UGC giveaways end up making common mistakes that keep them from getting the results they want.

A large percentage of businesses running UGC giveaways end up making common mistakes that keep them from getting the results they want.

We don’t want that to happen to you! So we’ve compiled a list of the most common mistakes marketers make with UGC giveaways.

When users upload photos, video or other content of them praising your brand or product, that doesn’t automatically mean you’ve got rights to use it.

If you’re hosting a UGC giveaway, of course the goal is to get plenty of great content you can use to help raise brand awareness and act as social proof. There’s nothing wrong with that, and the majority of users are well aware of it. That being said, you still need to ask for their permission before you actually share the content publicly or tag them. This is particularly true for users who happen to tag you in images on their private profiles.

Always get explicit permission to use content before you start sharing. You can comment on the post, asking for permission to share it, or you can private message the user. Many will be happy to oblige. Make sure to keep a record of your requests and your users’ replies. 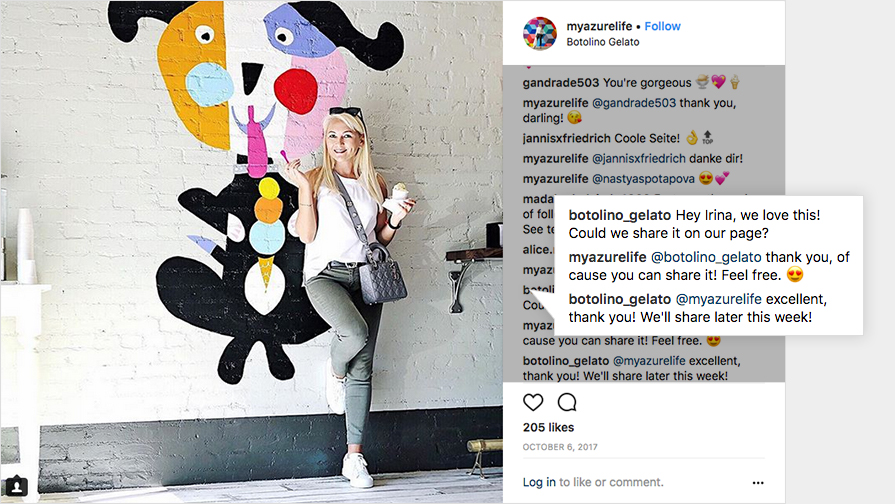 Botolino Gelato asks for permission to share this user’s photo

Who doesn’t love a contest where the gift is $1k or a new iPhone? No one. And that’s actually the problem.

If you aren’t offering prizes that are directly relevant to your business and your target audience, you’re not going to get the results you want. Anyone will do almost anything to win cash, but the UGC from random people who want money just won’t be as effective as UGC created by people who are passionate about what your business does.

To get effective UGC, ensure that your prizes are appropriate for your target audience

Focus on prizes that are directly valuable to your target audience and customer base — like one of your best-selling products or a gift certificate to your business (like in the example pictured above). You’ll get plenty of UGC from the people who matter, and you’ll be most likely to attract new leads and users who will become customers, too.

Mistake #3: Not Promoting Your Contest

Believe it or not, this is actually a really common mistake. Brands post about their contest once when it starts, maybe one more time before it ends, and then again after it’s over to announce the winner.

Even if Facebook’s organic reach weren’t in the gutters, this wouldn’t be enough promotion.

Sometimes, people need to see your contest several times before they’ll actually click. You also need to account for the fact that different users are online at different times of the day or days of the week. And yes, there are all those wonky algorithms to consider.

When I’m running a giveaway for a client, I post updates regularly and I also run ad campaigns boosting the posts. This extends the reach of the posts significantly: they’ll get in front of your current audience and new members of the target audience you want to connect to. When in doubt, you can also ask influencers to help promote or be the face of the contest, as Sprint did with Prince Royce. 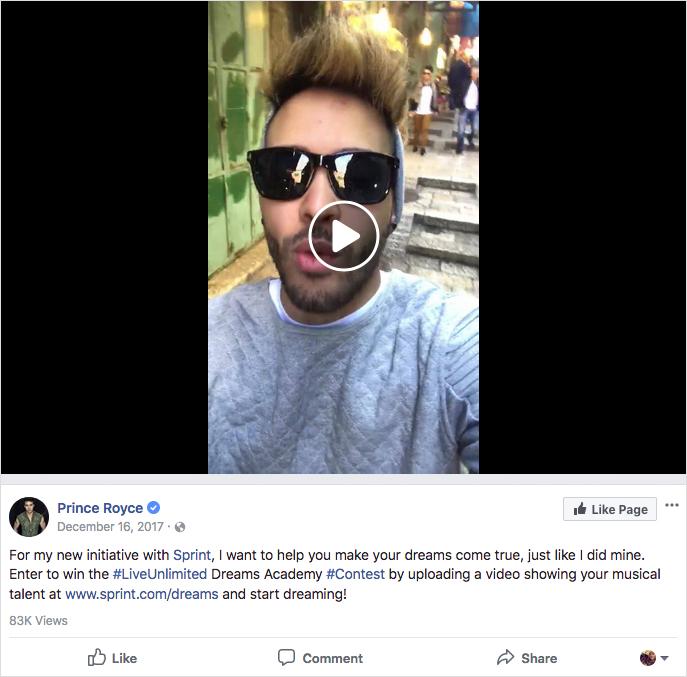 Sprint partnered with Prince Royce to boost exposure on their contest

The moral of the story here: post often, and make sure people know about your giveaway. You’ll get significantly more results.

For better or worse (and no matter how delusional it may seem), social media has ushered in a demand for transparency from businesses. Gone are the days when people would fall for cheap marketing tricks. Now, not only can customers spot the tricks, they’ll actually get mad about them.

When you’re hosting a UGC giveaway, keep that in mind. Don’t say, “Leave us a great review about our business in the comments below!” and hope for the best. Some people will do it, but plenty others will see it and know that many some of those answers were just sucking up to win a prize. 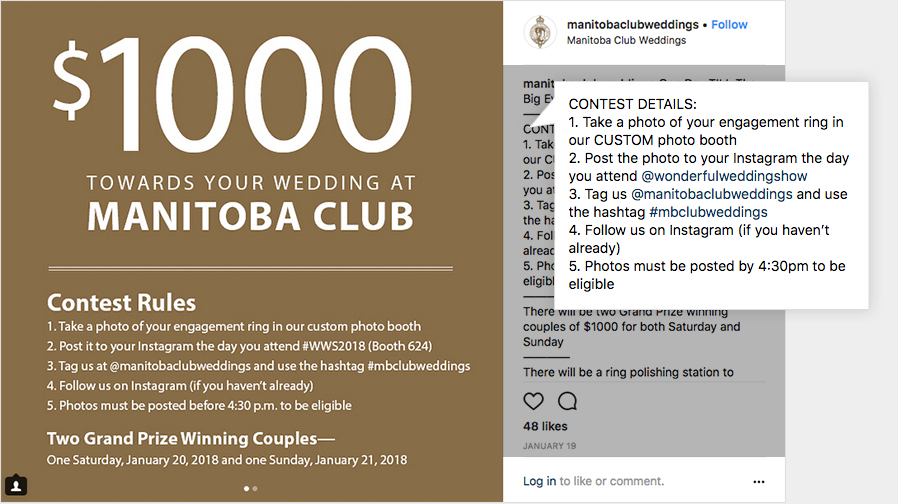 This contest didn’t ask for reviews of their venue; instead, they asked users to share pictures of their engagement rings, which many would be happy to do, and tag the brand, giving them publicity.

Instead, opt for more creative and opinion-based UGC. It’s a much better way to go. Think along the lines of, “Snap a picture of you and your favorite smoothie flavor next time you’re in the cafe!” or “Show us your go-to style hack for keeping your Banana Republic clothes looking fresh!” These options let users share their opinions (which everyone loves to do) so the kind words about your business won’t feel quite so forced. This kind of UGC will in turn feel more authentic, and be more persuasive when you use it in campaigns later on.

Mistake #5: Waiting Until After The Promotion is Over to Feature UGC

I’m going to throw out a rough estimate and say that about 90% of the UGC contests that I run into online make this one, giant mistake: They don’t use the content they collect until after the promotion is actually over.

90% of the UGC contests that I run into online make this one, giant mistake: They don’t use the content they collect until after the promotion is actually over

As long as you have permission to start using the content, you should do so almost immediately. Feature it on your site, and share it on social media. Not only is the UGC powerful in its own right, it will also remind users of the contest and show them some of the great entries you’ve had so far. This can increase both the number of entries and the quality of them.

Mistake #6: Ignoring Users Until After the Promotion Ends

Mistake #6 ties in a bit with mistake #5. You can’t just set your contest to autopilot, schedule a few posts promoting it, and wait until it’s over to engage. Some brands do this to avoid looking like they’re playing favorites and others do it because there’s so many entries it becomes overwhelming, but in reality you’re costing yourself a big opportunity. 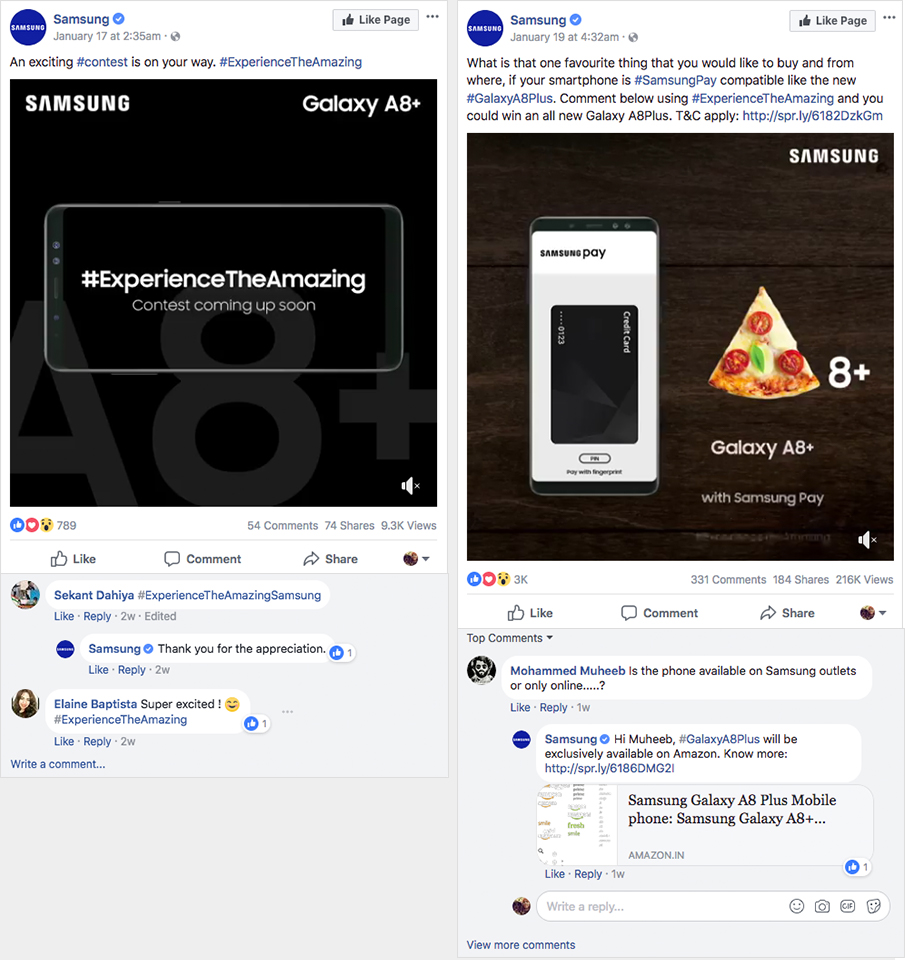 Engage with users for the duration of the contest. Like their posts, comment on them, and thank them for participating. You can even encourage them to tell their friends about it. Either way, this gesture will be appreciated and it will give you more social proof on your contest posts. All of this will benefit your giveaway.

Mistake #7. Keeping the Barrier of Entry Too High

We’ve all seen these giveaways — the ones where it feels like instead of just needing a follow and a great picture or comment, you’ll need to fork over your firstborn in order to win that gift certificate for five free coffees. 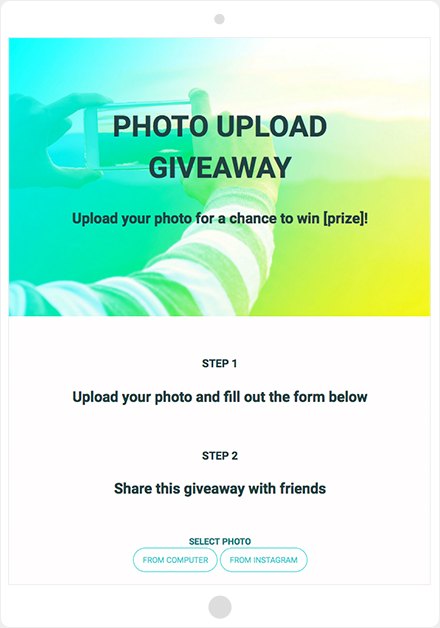 Keeping your barrier of entry low, like what we show with this example ShortStack templates for UGC giveaways, will increase participation.

You don’t want to make your contest too difficult to enter, or for the entry requirements to be too complex. This will drive people away, and cost you a lot of UGC and potentially even leads in the process. Since you want to get the most ROI out of your contest, you want (in general) as many people to enter as possible.

Mistake #8. Focusing Only on the Winners

Sure, there may be only be one winner, but there are a lot of other people who were invested in the contest, too. You don’t want to just focus on the person walking away with the prize, after all, because they’re already pretty happy with your brand.

Your giveaway shouldn’t feel so exclusive so that only the big players and professional-photography-level entries get a lot of attention. Make everyone feel important, and thank everyone for their participation and effort. Engage with them on social media directly when possible, and don’t be afraid to send a ShortStack autoresponder to all your contest participants, thanking them (and perhaps even sending a discount code, too).

UGC giveaways always have the potential to be enormous, untapped gold mines, but only if you execute them correctly. Avoid these eight common mistakes that marketers make with their giveaways and come up with a creative idea your audience will love. Then get ready to see the results start pouring in.