Here are some ways instant win contests can help your brand:

Eureka has been making high-quality vacuums for over 100 years. They decided to shake things up with an instant win contest to launch their NEW 200 Wet Dry vacuum. Learn more about their campaign and how they achieved some stellar results.

Eureka is a vacuum company founded in 1909 in Detroit, Michigan. They are known for creating efficient vacuums that last. In recent years, Eureka has focused on creating an innovative new product line. For Black Friday 2021, Eureka wanted to go big to launch their NEW 200 Wet Dry vacuum on Amazon.

To help with the initiative, Eureka turned to Somos Digital, a creative digital marketing agency. According to Frank Velasquez, the Social Media Manager at Somos Digital, the goal for the Eureka campaign was to collect 15,000 leads for an email marketing campaign.

The Solution: A spin the reels contest

The Somos Digital team recommended a couple of different contest types based on Eureka’s team goal of collecting leads. In addition to the possibility of winning a NEW 200 Wet Dry vacuum, contest entrants would be given a coupon for $40 off the price of the vacuum on Amazon. In the end, the Eureka team chose a spin the reels instant win contest. That’s how the #SpinItWinItCleanIt giveaway was born.

When working with a new product release, hosting an instant win contest and presenting entrants with a coupon code is a smart choice. Entrants are excited about your product when they enter to win it. If they find out immediately that they didn’t win, but there is a sizeable coupon for your product, they might decide to buy it. When entrants have to wait to find out if they’re a winner, the excitement might wear off.

The #SpinItWinItCleanIt giveaway ran for 25 days during the holiday season, starting on Black Friday, November 26, 2021, and ending December 20, 2021. It targeted people interested in owning a NEW 200 Wet Dry vacuum, which they released on Amazon. With this in mind, the prizes for the contest were the NEW 200 Wet Dry vacuum and Amazon gift cards. Fifty prizes were awarded in all. Between one and three instant win prizes were awarded each day. The prize breakdown was:

Folks filled out a form with their name and email address to enter. They also had the option to sign up for email marketing from Eureka. These entries were sent on to MailChimp via ShortStack’s built-in integration for double opt-in confirmation.

A reel showed after submission. The entrant clicked to spin the reel. If three NEW 200 Wet Dry vacuum symbols were displayed on the reel in a row, the entrant was a winner.

People were allowed to enter once every 12 hours; however, they were only allowed to win one time. Allowing for multiple entries during an instant win contest helps keep your product on the customer’s mind, a smart move during the holiday season!

Velasquez shared that the “campaign was mostly promoted through Facebook ads,” for which they had a budget of $19,000. They also recruited influencers to drive traffic to the giveaway page. 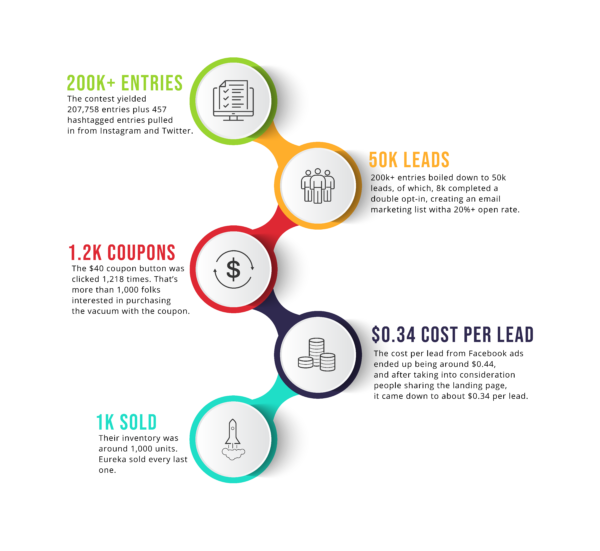 The contest yielded 207,758 entries. Velasquez mentioned these 200K+ entries boiled down to more than 50,000 leads. After the double opt-in process was complete, around 8,000 emails were used for email marketing purposes.

Double opt-in IS a higher standard, as it requires people to opt-in and confirm that they want to receive marketing messages. The double opt-in requirement means the 8,000 leads are genuinely interested in receiving marketing emails from Eureka. To this end, Velasquez said the emails they sent to this list had “20%+ open rates and 3-5% click-through rates.” Those are some great results.

They also collected another 457 hashtag entries from Instagram and Twitter. Their contest landing page had 507,014 views. Of the nearly 235K autoresponders sent, 44,191 were opened — an open rate of about 19%. The contest was shared 2,200 times.

People clicked the button for a $40 off coupon code 1,218 times. That’s more than 1,000 folks interested in purchasing the vacuum with the coupon. To this end, Velasquez described an additional benefit of this contest, “Even though our main objective was leads and not conversions, Eureka sold out all their inventory of the NEW 200.” He indicated their inventory was around 1,000 units.

A few things surprised Somos Digital about the campaign. First, they expected the cost per lead to hover around $1 due to the campaign launching on Black Friday – a time of year where advertising rates are a bit steeper. However, the cost per lead from Facebook ads ended up being “around $0.44, and after taking into consideration people sharing the landing page, it came down to about $0.34 per lead.” They were happy to learn that all units sold out during the campaign.

Somos Digital’s strategy to use an instant win campaign for Eureka’s product launch was a smart move. Giving away vacuums and gift cards to Amazon ensured that the leads collected were interested in the product. Providing participants with a discount made everyone a winner and provided additional incentive to purchase the NEW 200.

Velasquez said they weren’t surprised at how effective this campaign was. “[We’ve] run several ShortStack giveaways before, and we’ve gotten similar results.” The Somos Digital team’s understanding of how to leverage the strengths of an instant win contest certainly paid off big for Eureka.

Interested in running an instant win contest of your own? Check out our helpful guide.

Jane is ShortStack’s Marketing Director. She holds a Masters of Public Affairs from the University of Texas at Austin. In addition to working on the marketing team, Jane has worn many hats at ShortStack over the years, including leading our customer support and success team. Read more articles by Jane Vance.