When most business owners plan their sales and promotions for the holiday marketing season, they think about the two biggest shopping days of the year: Black Friday and Cyber Monday. While these days definitely deserve a bit of special attention, there are seven (seven!) other shopping days that occur during the holiday season that — judging by last year’s sales figures — consumers are eager to partake in.

We have suggestions below for how to take advantage of each day using ShortStack Campaigns, plus links to the mobile-ready ShortStack templates you can use to build them. (You’ll find many more resources on our Holiday Workshop page.) You can build everything listed here for free — all you need to do is set up your free ShortStack account.

What: Gray Thursday, aka Thanksgiving, came about since Black Friday sales are starting earlier and earlier.

How you can capture some Thanksgiving spending: Using ShortStack’s “Story Contest” template, create a Campaign to invite your followers to share their favorite Thanksgiving memory or tradition for a chance to win a prize. 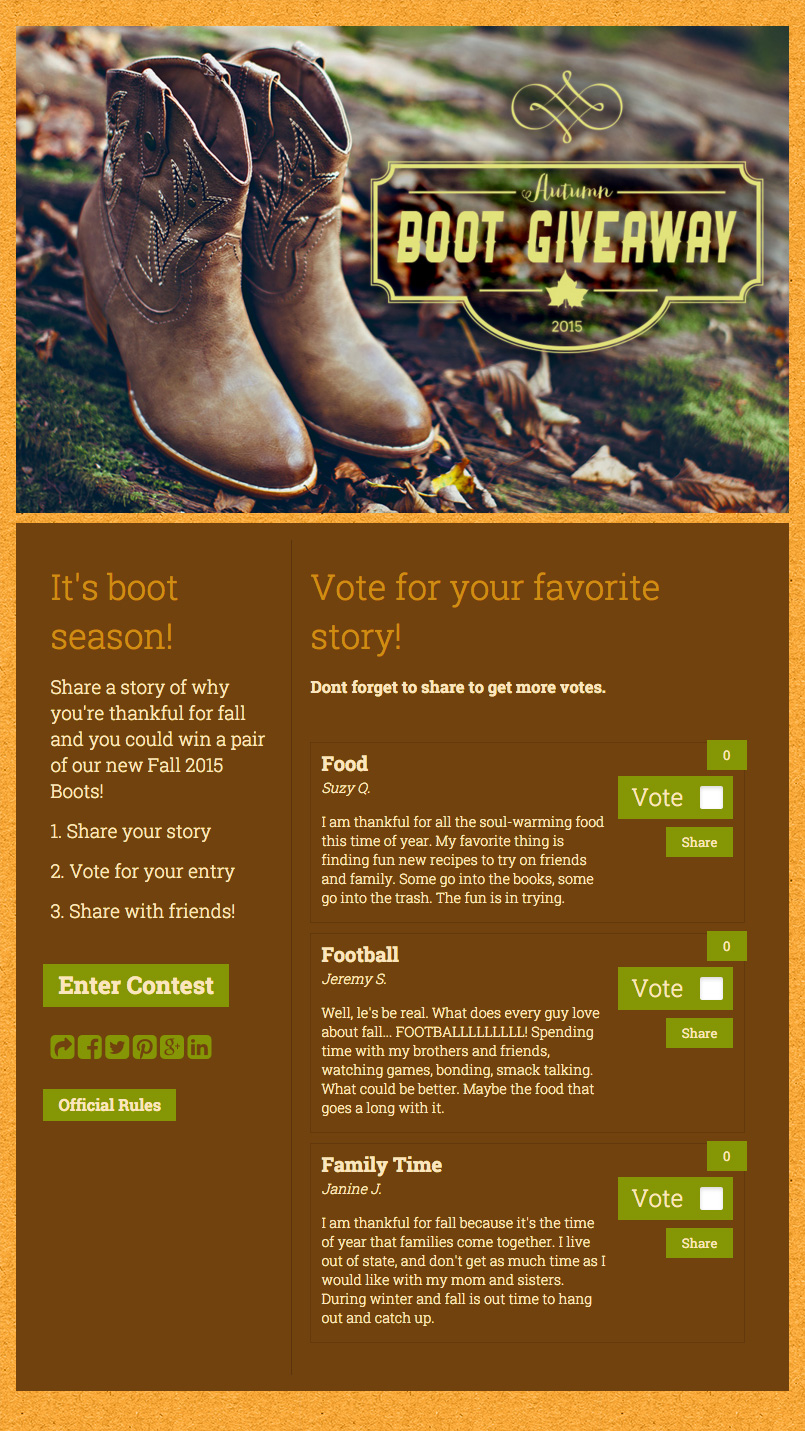 What: The day after Thanksgiving (in the US); consumers shop for special Christmas deals.

Why: Even though Black Friday spending was down 5.6% over 2013, shoppers spent $9.1 billion on the day after Thanksgiving.

How you can capture some Black Friday spending: Create a Campaign using ShortStack’s ”Black Friday Coupon Code” template to share an exclusive coupon your customers can use during this popular shopping weekend. 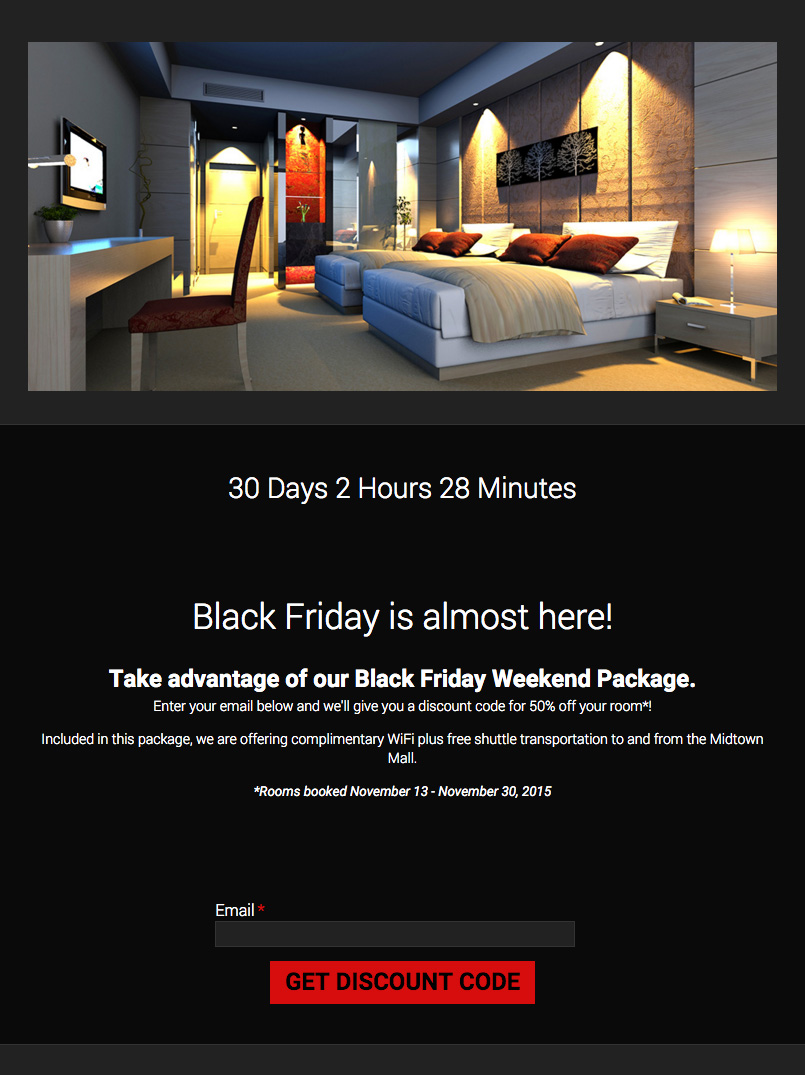 Why: In 2015, consumers will spend an estimated $5.9 billion on the Saturday following Thanksgiving.

How you can capture some Small  Business Saturday spending: Create a photo contest using ShortStack’s “Photo Vote Contest” or “Instagram Contest” templates to inspire people to come to your store on Small Business Saturday and take a photo of their favorite item for a chance to win it. The photo with the most compelling caption and/or votes wins! 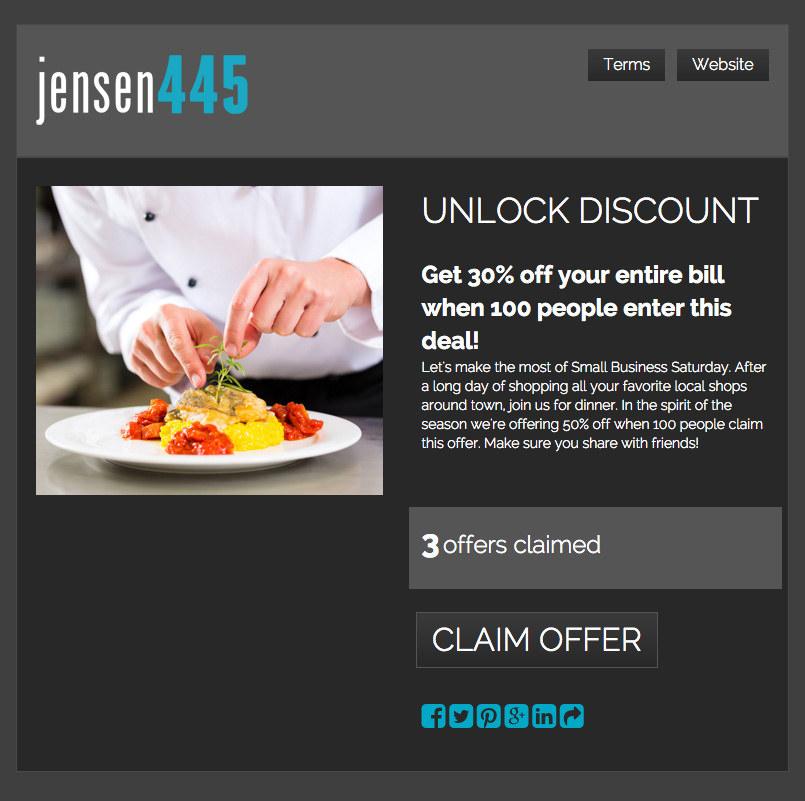 What: Cyber Monday is quickly becoming the biggest shopping day of the year. This day is huge for online retailers as it appeals to the growing number of consumers who want to shop from home, or while on the go.

Why: In 2013, $1.735 billion was spent on Cyber Monday, making it the biggest online shopping day in the U.S ever, according to comScore.

How you can capture some Cyber Monday spending: A week before Cyber Monday, create a sweepstakes using ShortStack’s “Sweepstakes,” “Vote to Enter Sweepstakes,” or “Extra Points Sweepstakes” template to give your followers the chance to win an Cyber Monday shopping spree worth a specific amount for your store. For those who don’t win your sweepstakes, use the emails you collected during your Campaign to notify them on Cyber Monday with a special “thanks for entering” promo code of their own. 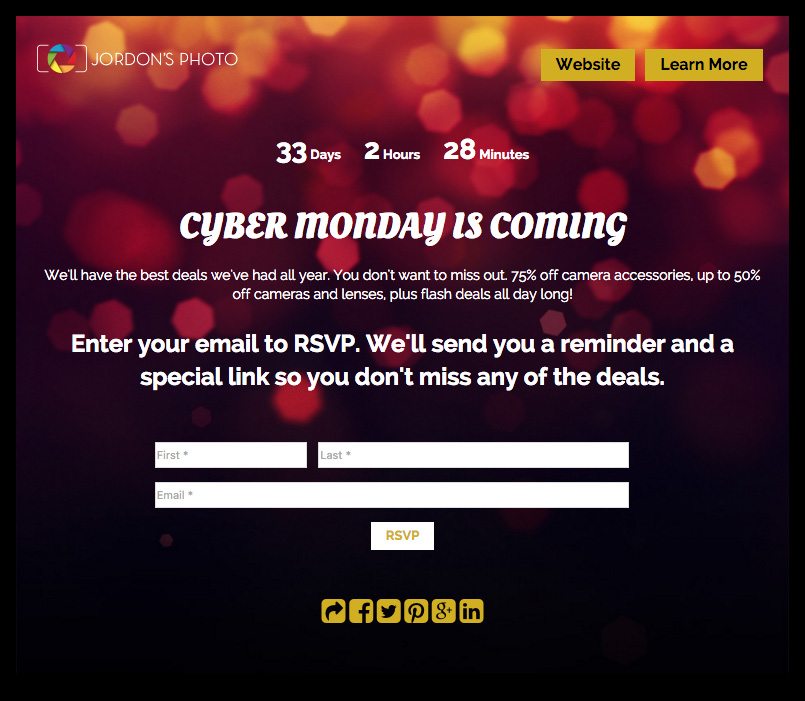 What: Giving Tuesday is a one-day national effort to help charities raise money online during the holiday shopping season.

Why: The first Giving Tuesday was held in 2012 and 2,600 non-profit organizations received donations. In 2014, people around the world gave more than $45 million to charitable organizations.

How you can capture some Giving Tuesday spending: This holiday season, roll up your philanthropic sleeves and dedicate a sum of money to donate. Instead of you deciding which charity to donate to, create a Campaign using ShortStack’s “Vote Only Crowdsourcing” template to let your followers vote on the charity they want your donation to go to. If you’re a nonprofit, you can also use this template to gather donations yourself. 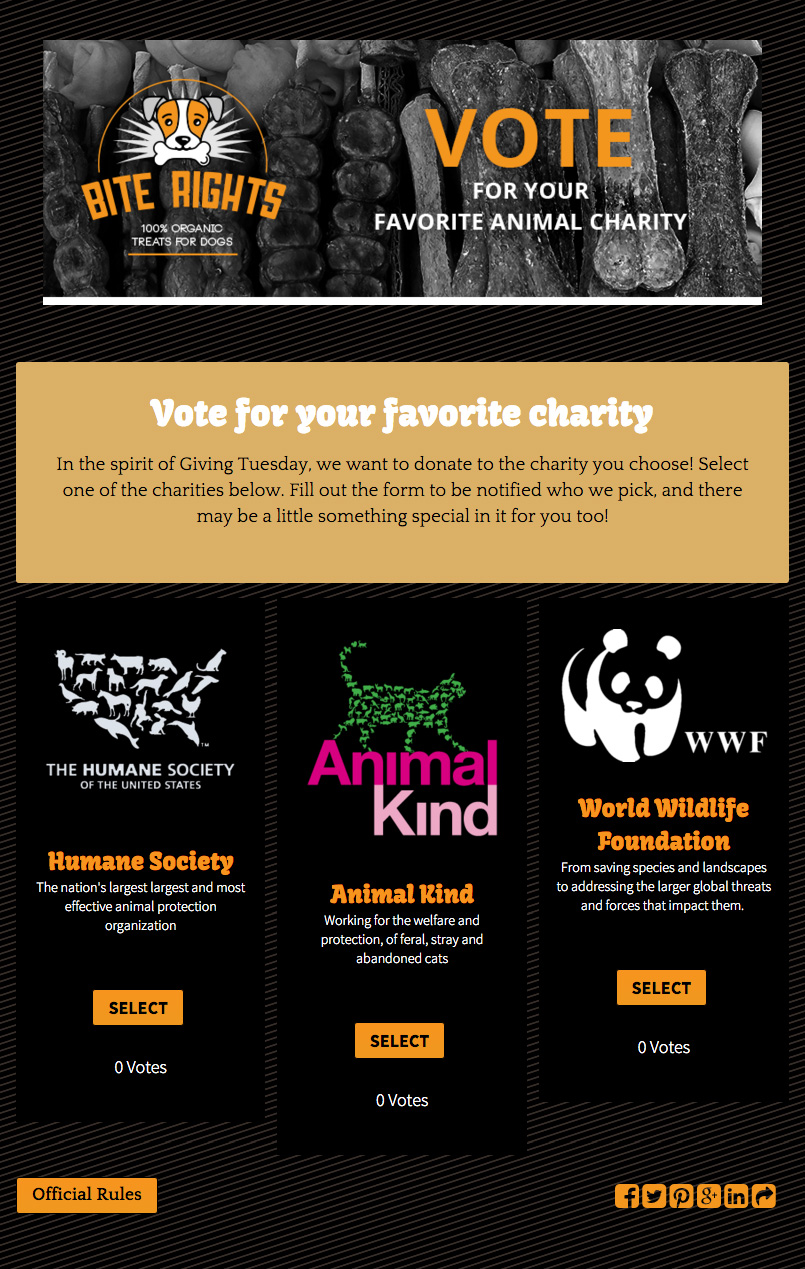 What: Green Monday is the second Monday of December and is historically one of the busiest shopping days of the month.

Why: In 2014, online consumer spending on Green Monday amounted to $1.6 billion U.S. dollars and is defined to represent one of the top three sales days in December. While Green Monday’s sales numbers don’t trump Cyber Monday’s, they come pretty close.

How you can capture some Green Monday spending: During this busy shopping period, plan a Campaign that will incentivize your followers to share your brand’s holiday promotion with their friends. Using ShortStack’s “Refer-a-Friend Contest” template, create a contest with an exciting prize that rewards your followers/contest entrants when they share a link to your Campaign.

What: Free Shipping Day is a specific day in December when online businesses offer free shipping. Online retailers that participate in this shopping day event guarantee that purchases made on the day will be delivered — for free — by Christmas Eve.

How you can capture some Free Shipping Day spending: Using ShortStack’s “Subscribe to Receive a Coupon” template, create a Campaign that reveals a free-shipping coupon code (great for online checkout!) when your followers opt into your newsletter with their name and email address. 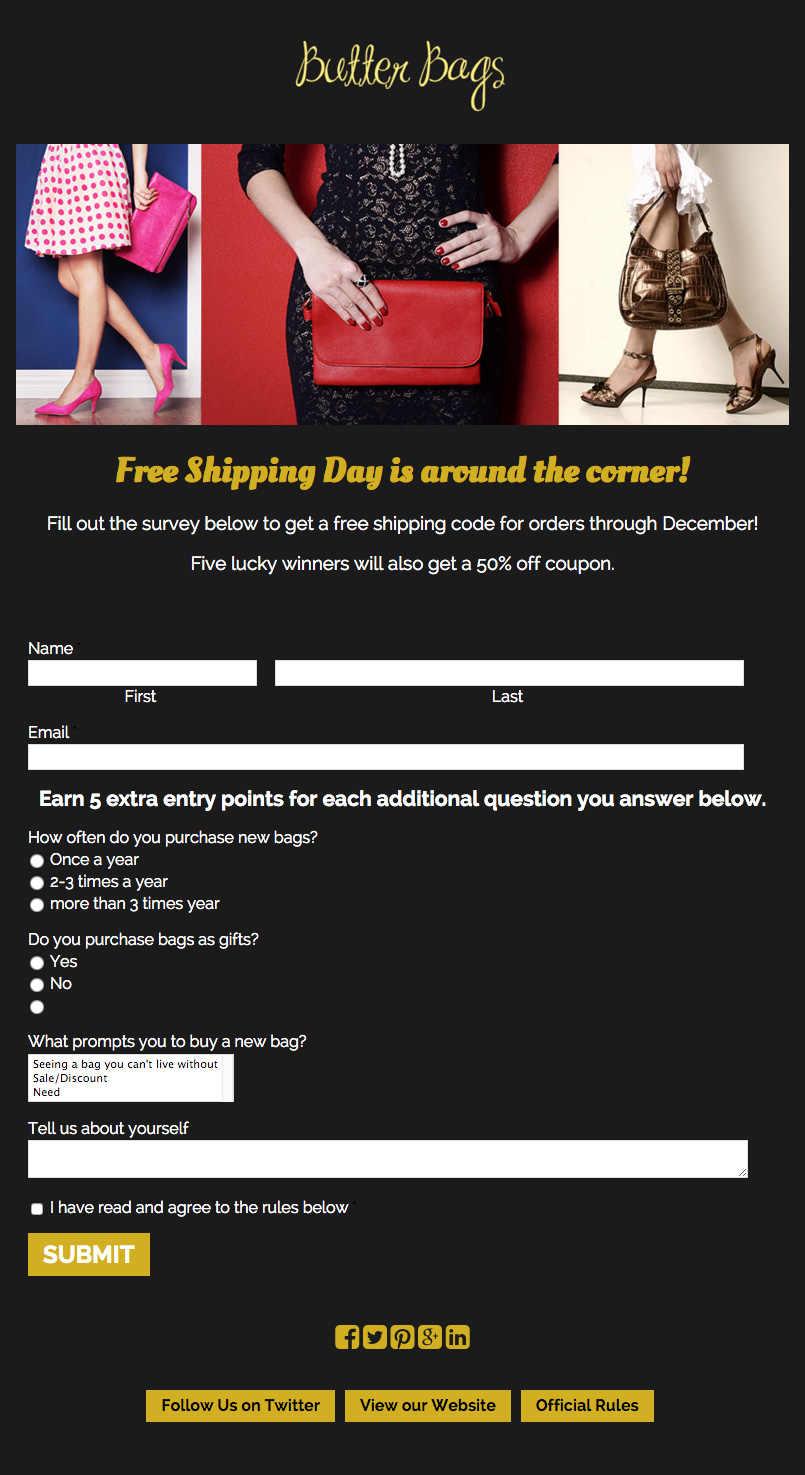 What: Super Saturday is the final Saturday before Christmas.

Why: Super Saturday was the busiest shopping day of the holiday season in 2014,  according to reports by ShopperTrak.

How you can capture some Super Saturday spending: Attract last-minute shoppers by sharing with them an exciting holiday deal. Using ShortStack’s “Enter to Receive a Coupon” template, create a Campaign that reveals a coupon code (great for online checkout) or a physical coupon (which can be downloaded and printed) when one of your followers shares their email address. 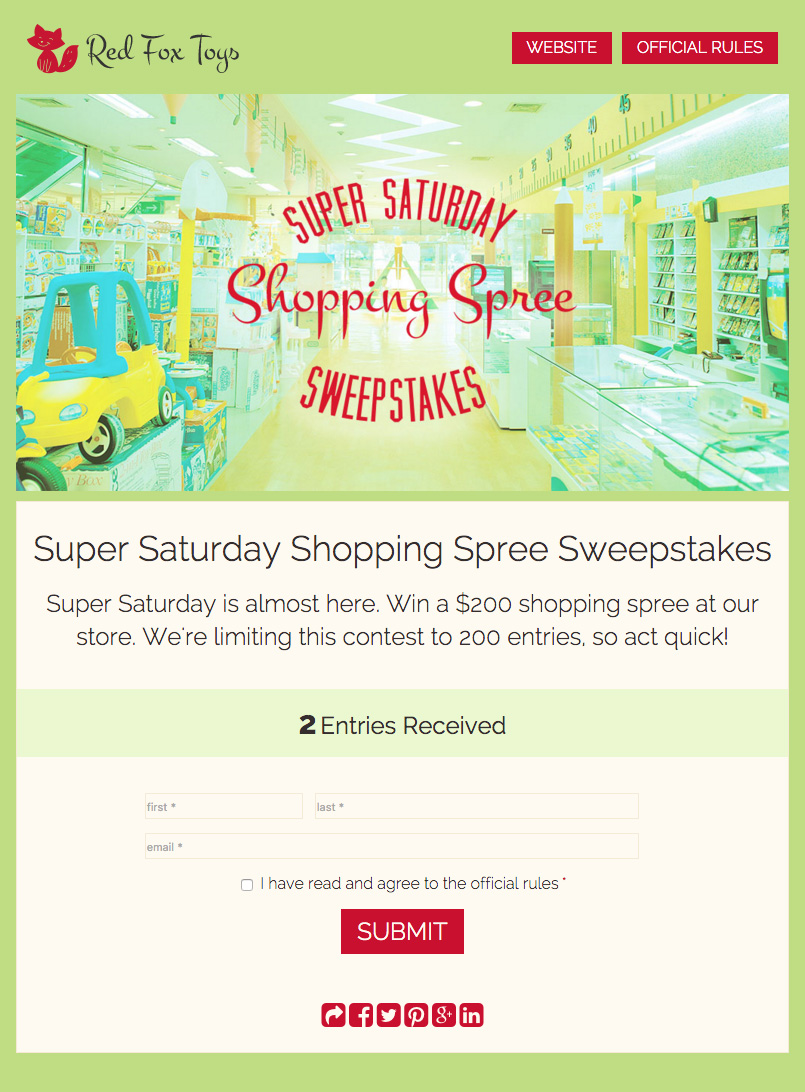 Why: For the eighth year in a row, gift cards are the most requested gift item among those celebrating the holidays, according to the National Retail Federation’s 2014 consumer poll. The trouble is, not everyone who receives a gift card for a specific store will want to keep it.

How you can capture some Gift Card Exchange spending: Create a Campaign that lets your followers exchange their unused gift cards from other businesses for gift cards from your business. Lots of companies, like CVS, Best Buy and United Airlines allow you to do this. To create a Gift Card Exchange Campaign, use ShortStack’s Image Widget to create hot spots that direct to a gift card swap or exchange site.