The Best Instagram Contest Ideas to Increase Followers and Sales

Instagram contests bring in followers – one industry study showed a +70% increase in followers for accounts using contests. We wanted to share some ideas that any business could try.

In this post, we’ll look at a handful of Instagram contests, examine why they were successful, and identify key elements that drove their appeal.

The Shorty Awards is an annual event that recognizes standout social media campaigns. The awards feature content that has been posted to Instagram, Facebook, YouTube, Twitter, TikTok and more. The organization selects winners based on votes from the public and scores from the Real Time Academy, a group of leaders in technology, journalism, business and culture.

Here are some noteworthy contests selected as finalists and winners at The Shorty Awards over the past few years.

St. Baldrick’s has been running this contest since 2014 and it keeps getting more and more attention. The contest attracted media attention from Buzzfeed, Yahoo!, CNN, People, USA Today, CBS, Fox, Inside Edition and PopSugar. Not bad for a user-generated content campaign where the prize was a St. Baldrick’s “Love Your Melon” beanie.

What made the St. Baldrick’s #BestBaldDad contest successful?

You could do a contest like St. Baldrick’s Foundation and collect leads at the same time using ShortStack’s Instagram Photo Upload Contest Template.

Old Navy wanted to attract the attention of both tweens and their mothers (since mom holds the purse strings). The contest focused on having tweens share stories about their “squads” and how their friends motivate them. In exchange for sharing a photo with their squads, kids were entered to win one of several prizes. The grand prize was a hometown visit from a handful of social media celebrities for a “best day ever.”

What made the Old Navy contest successful?

When Ally Bank learned that HALF of the 13 billion pennies produced by the U.S. Mint each year fall out of circulation, they had the idea to start a conversation about finances and savings. Their concept — that people don’t pay attention to pennies — inspired the contest. Ally Bank placed 100 ordinary looking pennies in 10 American cities, on hiking trails, fishing piers, near landmark sites, etc. Each penny was marked with an Ally logo on one side and a call-to-action on the other. The CTA was simple: “Visit AllyLuckyPenny.com and you could win $1000.”

The contest increased awareness of the bank by 57 percent, and drove 1.1 million people to visit the program’s landing page. It also helped the bank surpass its “deposits” goal by $1.5 billion.

What made the Ally #LuckyPenny contest successful?

• The giveaway sparked a conversation about finances and made people more…invested….in learning about how easy it is to start a savings account.

These recent Instagram contests, from large brands and newcomers, also boosted engagement. Here are some additional ideas to think about as you plan your next Instagram promotion.

In this contest, boohoo notes they’ve reached a targeted follower count (3 million) and as a thank you, offered entrants the chance to win a tropical vacation. This post alone had more than 10,000 likes. boohoo Clothing hosts contests regularly — which has helped them gather 5.8 million Instagram followers. 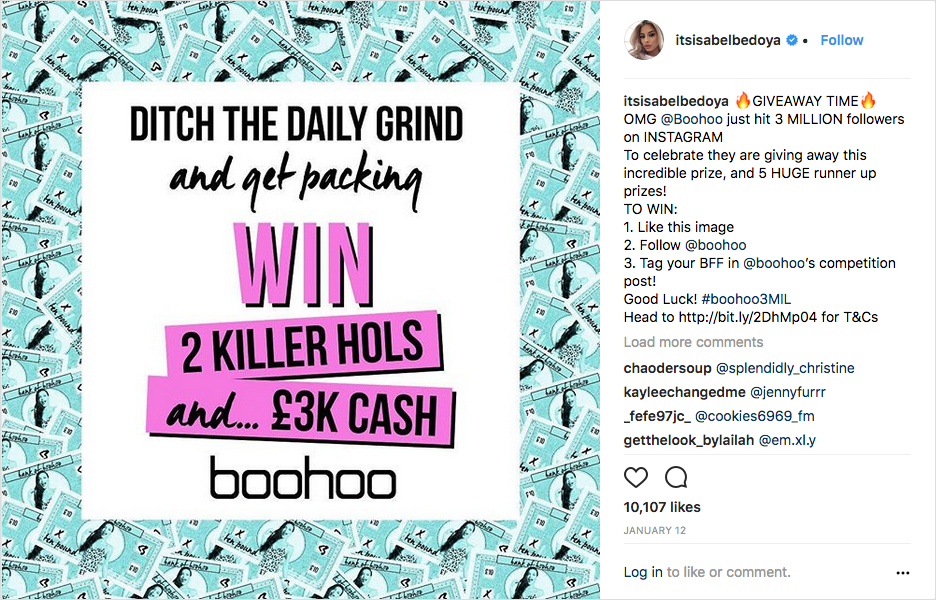 What made the boohoo Clothing contest successful?

We have thousands of days devoted to acknowledging various products, behaviors, and events.

Bluenotes’ Jeans celebrated National Sweatpants Day (yes this is real, it was January 21st) with a contest. Follower gains haven’t been tabulated, but the account, with 21,000 followers, had 14% engagement with the two-day event. 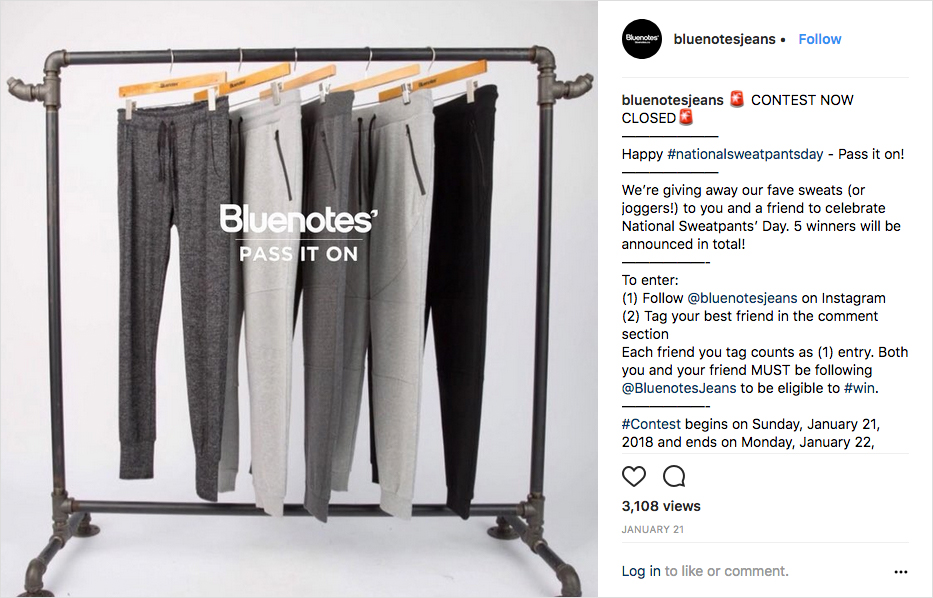 Like a Mountain Girl, an online retailer of mountain-inspired apparel and jewelry, partnered with a regional artist, Werrell Woodworks, and an online community love_the_room. Although the contest had multiple sponsors, entry was straightforward. Engagement for Like a Mountain Girl was up +5% — for the partners, who had a smaller Instagram presence, participation gains were more significant. 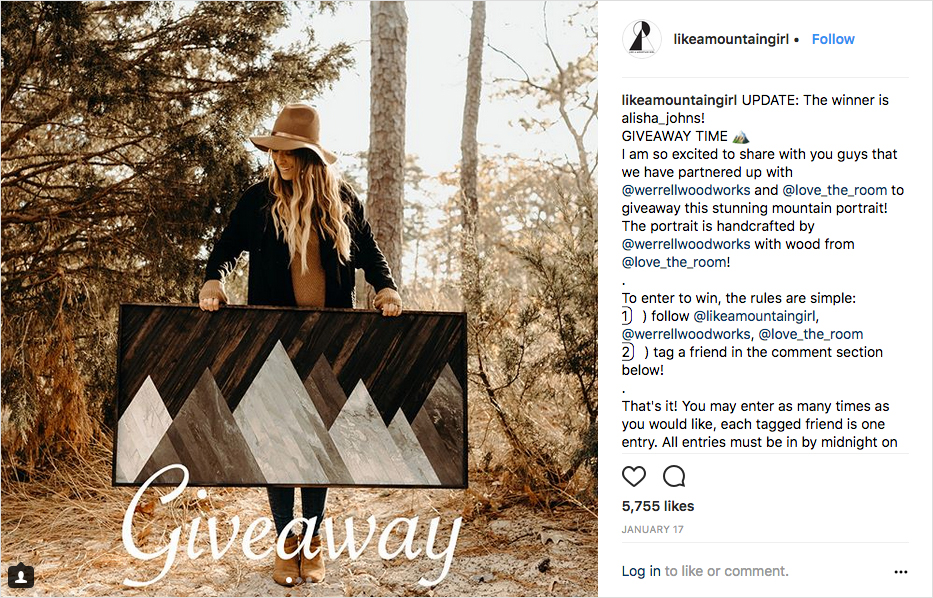 Increasing followers with your Instagram contest is less about the prize value and more about the experience you provide. Evoking a memory, encouraging creativity, offering acknowledgment, expressing gratitude, or simply delivering fun can all attract new followers.