Building brand awareness is an important marketing strategy that can be executed with the help of social media.

In this case study, we’ll show you how Tootsie Roll Industries leveraged their Tootsie Pops brand page and used a giveaway to raise brand awareness, plus gauge interest in and receive feedback on a new product.

Here’s what you’ll learn from this case study:

Here’s a step-by-step look at what Tootsie Pops did to accomplish their goals along with tips on your can apply them to your own Campaigns.

Setting defined goals is key to running a successful Campaign. Decide: What are the top one or two things (three at the most) you want to achieve?

Tootsie Pops’ main goals were to increase the brand awareness and gauge interest of a new Tootsie Pop flavor. The special pop was available in a limited number of stores and the brand was interested in getting customer feedback and generating buzz about the new product.

“Our social media goal is almost always to keep our fans engaged and obviously to grow our audience,” said Austen Huth, Social Media Analyst for Tootsie Rolls. “We decided to take the opportunity to make some buzz about a brand new pop flavor by asking people and our fans to become taste testers for the brand. In theory it would create fun and excitement on the page and, since it’s candy, we want to keep it fun!”

The takeaway: If you’re looking to increase brand awareness or create buzz for a new product, consider a fun giveaway that makes your fans feel like they’re a part of your team.

Once you’ve narrowed down your goals, it’s time to determine what type of Campaign will help you to reach those goals.

Since Tootsie Pops was looking for customer feedback, they decided that a giveaway that asked their fans to taste the latest pop was the perfect way to drive engagement. Tootsie Pops chose to use a ShortStack form to collect the names and email addresses of fans who were interested in becoming taste testers. 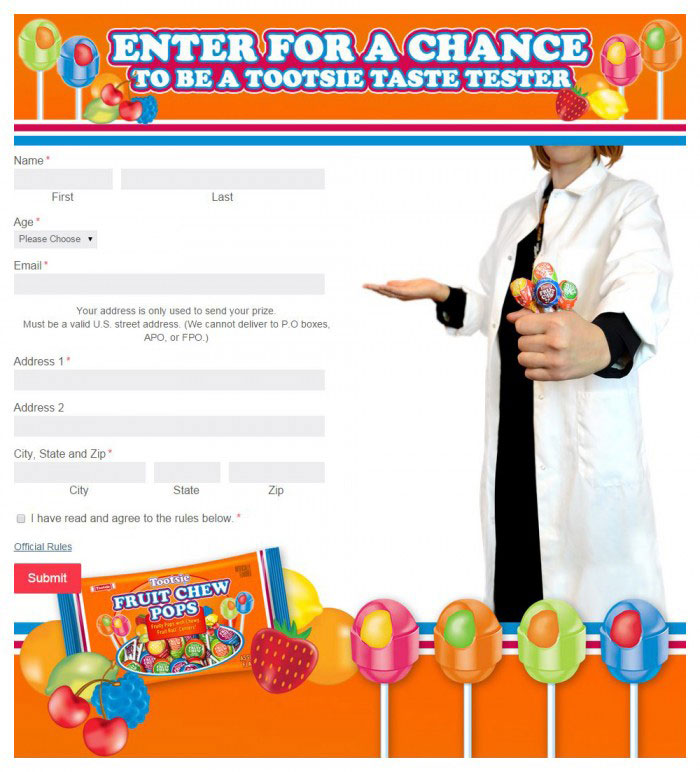 Tootsie Pops placed their form on a branded Campaign that was published as a landing page. While Tootsie Pops was looking to only engage with their Facebook audience, they wanted entry to be as seamless as possible. Publishing their Campaign as a landing page ensured that mobile and desktop fans could participate in their giveaway without any barriers from Facebook.

“Our website traffic was down because of  ‘construction’ and we were looking for a way to drive people to the redesigned website,” said Huth. “Previously we would only use Facebook to reach our audience but this time we used ShortStack so  our Campaign could be promoted everywhere, including Facebook. With the ShortStack Campaign, we got way more traffic than we thought we would.”

The Tootsie Taste Tester Campaign allowed fans to enter for a chance to be one of the exclusive taste testers of Tootsie’s latest pop, a flavor that had not yet reached the global market. They enticed visitors with an exclusive and fun offer.

The takeaway: Building a campaign as a landing page allows you to brand the Campaign with your business and drive traffic to your website.

The most important step in executing a Campaign is promoting it. The “build it and they will come” theory does not work for most marketing campaigns.

“We wanted this promotion to be more exclusive and also have some incentive for our fans to give us real feedback,” said Huth. “What better way to get this feedback than by actually adding them to the Tootsie team? We also gave them something that wasn’t truly available yet, so there was some exclusivity there.” 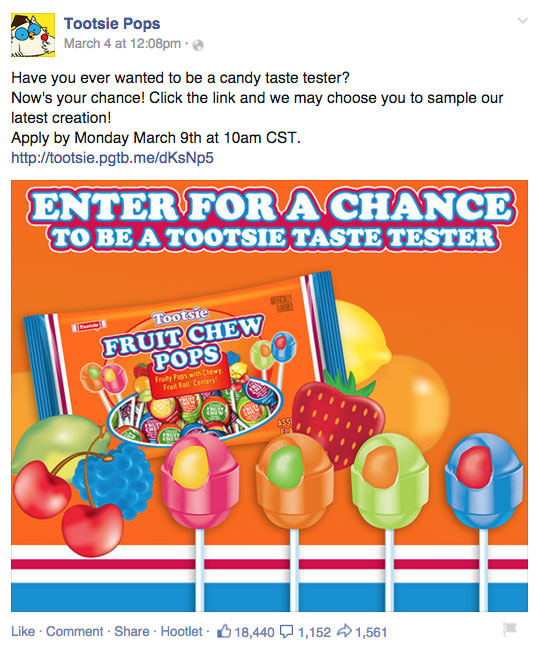 By paying to promote their post, Tootsie Pops was able to increase their reach on their post by 587%.

Having a small advertising budget to support a marketing campaign can help you extend the reach of your campaign beyond your organic audience. There are a variety of cost-effective ways that you can promote a campaign each time you run one.

The takeaway: To boost engagement and interest, offer something exclusive to your fans.

Step #4: Collect and Analyze the Results

Tootsie Pops received 43,292 entries in just three days. This was a 702% increase in entries from a similar promotion they had run in the past. Tootsie Pops’ Facebook post reached  more than 495,000 people and their promotion as a whole reached more than one million people.

“The promotion was a success and people were writing in and calling, even after it was over, asking if they could become taste testers,” said Huth.

From the 43,292 entries, Tootsie Pops secured 400 taste testers, exceeding their original goal of 100.  The 400 Taste Testers were mailed a Tootsie Pops sample pack that included a printed insert with a QR Code that took testers to a ShortStack-built survey with 10 feedback questions about the new pop.

From the 400 taste testers they received feedback on their new Tootsie Pop flavor from 265 people.

The takeaway: Use a follow-up survey to gauge your audience’s interest in your new product.